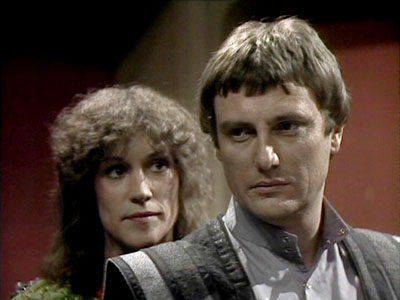 An exercise in format-testing/stretching, Mission to Destiny ditches Blake’s beef with the Federation for a week and replaces it with a good old-fashioned murder mystery. One in which Avon gets to call the shots. For the most part the proceedings are handled reliably if unshowily by Pennant Roberts. Although, he seems to have taken an arbitrary approach to shooting some scenes on film and others on video. If the mystery itself is a fairly standard set-up, it succeeds by revelling in the trappings rather than paying lip service to them. 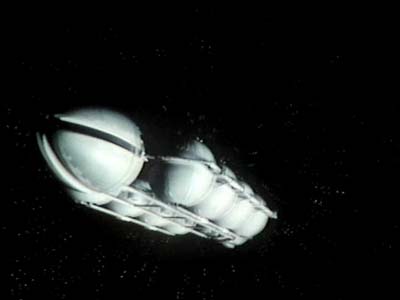 Vila: Mock if you like, but I can always sense danger.
Gan: Yes, even when there isn’t any. 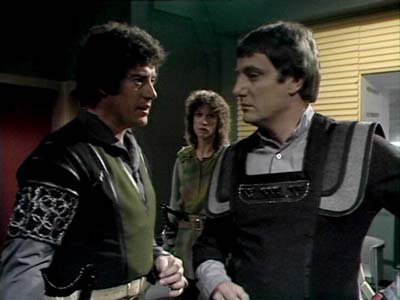 Avon, Blake and Cally teleport across to an orbiting Galaxy class cruiser where all the crew have been rendered unconscious by sono vapour. The pilot has been killed, but managed to scrawl 54124 in his own blood before expiring (it’s always useful when dying people are so forward thinking). One of the crew is missing and a life rocket has been launched. We learn that the crew are taking a valuable neutrotope back to their fungus-afflicted planet of Destiny (a name that’s asking for trouble). The neutrotope should save them from the fungus. 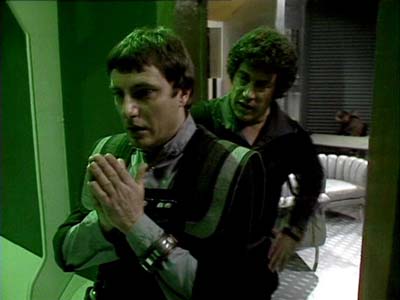 With news that it will take five months to reach Destiny, Blake elects to take the neutrotope ahead while Avon and Cally remain as willing hostages, although Avon has his own reasons, not caring about the fate of the farmers.

Avon: I shall stay because I don’t like an unsolved mystery. 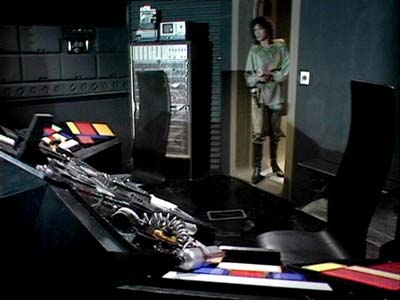 Leaving their guns with Blake is daft, though. The B-plot of the Liberator’s journey to Destiny is fairly risible; they get afflicted by some meteors, then turn back when they find the neutrotope wasn’t in its box (checking before leaving would have been sensible). Obviously, it was the murderer who went to fetch the neutrotope to give to Blake.

Cally: My people have a saying. A man who trusts can never be betrayed. Only mistaken.
Avon: Life expectancy must be fairly short among your people. 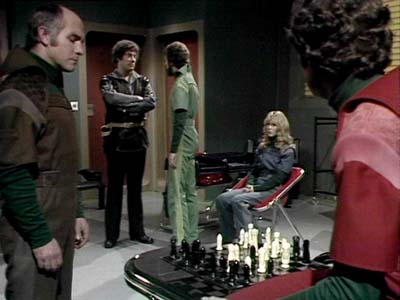 The assembled murder suspects are Dr Kendall (Barry Jackson – Drax in The Armageddon Factor), Sara, Mandrian, Sonheim (Bulic in Roberts’ Warriors of the Deep), Levett, Grovane (Carl Forgione, Nimrod in Ghostlight and Land in Planet of the Spiders) Pasco (K9 himself, John Leeson) and Rafford. Oh, and Stuart Fell plays dead Dortmunn. He gets all the best parts. 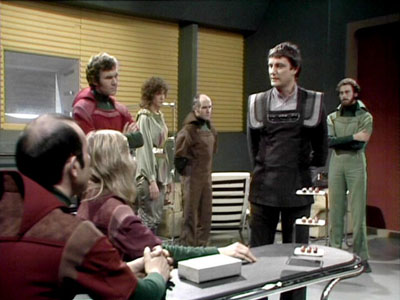 Paul Darrow relishes playing Avon as Hercule Poirot with a sneer. Cally suggests that the death of the pilot was an accident.

Cally: A misfortune.
Avon: It certainly was for him. 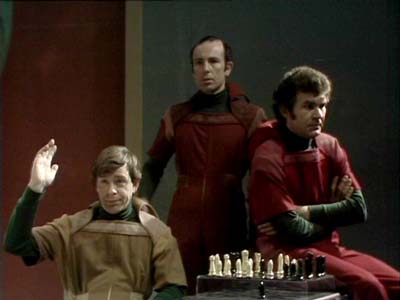 At this point Avon latches onto the truth (the numbers were actually badly written letters, spelling out Sara, which is almost quite clever, but in practice rather unlikely that the pilot would badly spell all the letters of her name as numbers). Also amusing is Avon lapsing back into not-giving-a-toss mode, having finished his mental exercise and unmasked the fleeing murderer. 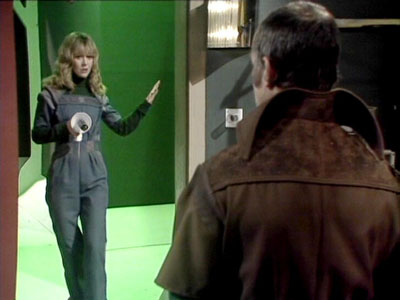 Avon: Well she’s one of your crew. You’d better get after her. 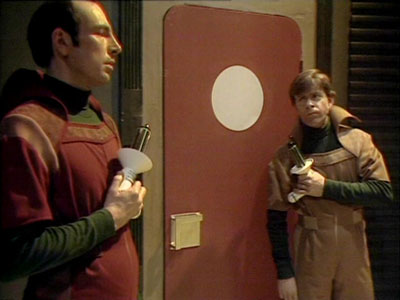 Less satisfying is the ruse to persuade Sara to leave the flight deck, by making it appear the crew killed each other in some sort of dispute. It gives Darrow another delightfully nasty moment as Avon, though, punching her out. 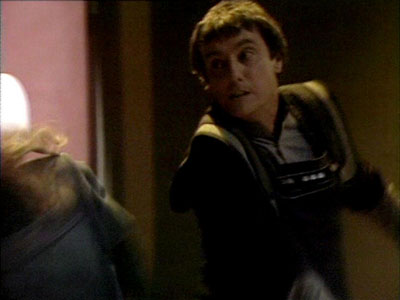 Avon: You better get her out of here. I really rather enjoyed that. 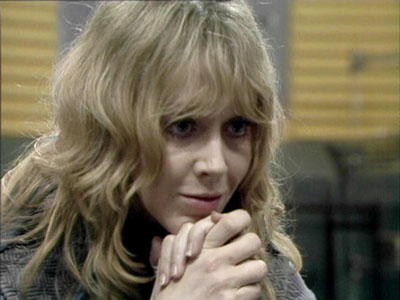 I’m not sure that Blake ought to be so gleeful about having rigged a charge on the engine hatch of the cruiser, which blows up Sara (she managed not to transport to the Liberator at the last moment) and the rendezvous-ing ship that is set to buy the neutrotope. A bit unnecessarily ruthless.

Great fun this one, if atypical of the mission against the Federation storylines we expect. Darrow relishes taking centre stage, but the Liberator subplot is very weak.