Everything will be all right in the end. 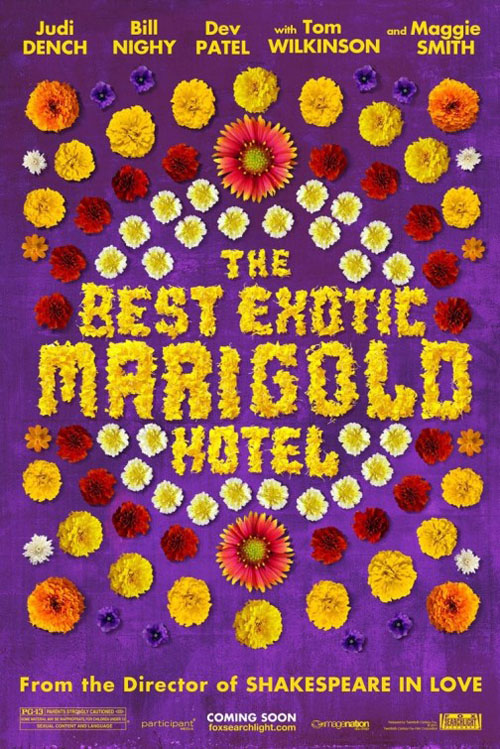 $100 million worldwide and counting for this year's definably British big hit. Perhaps pensioner appeal is part of the reason for its success too.  This is so safe, familiar and generic that it's hard to come down strongly negative or positive about any of it.


Assembled ageing British thesps retire to India and prove they're not quite dead yet. Like an ex-colonial Cocoon. Scriptwriter Oli Parker ticks off a list of broad stroke character types (bitter wife and shrewish husband with floundering marriage, gay, recent widow, racist, sex mad), the sort of motley line-up that flies in other desperately safe and inoffensive homegrown comedy flicks (e.g. The Full Monty). He then struggles to find adventures of physical and emotional discovery for them.  Compering their stay is Dev Patel's comedy-Indian hotelier. I was amused that the loveable-really racist ends up de facto manager; a good thing the Brits were there to hearken back to the days of the Raj!

The cast is perfectly watchable, but the only affecting moment comes from Tom Wilkinson's reunion with a long-lost love. Penelope Wilton has the most unsympathetic role imaginable, while Nighy and Dench could essay their roles in their sleep. Ronald Pickup is probably most fun. Interesting to see the age range (a good 15 years between some of the actors, notable given one romance in particular being the opposite gender-wise to what we usually see).

John Madden still hasn't been able to make good on the promise of Shakespeare in Love (is it a coincidence that Patel's sentiment that everything will be alright in the end is the same as Geoffrey Rush's in that film?). His films tend to be competent but come up wanting on the script front. Respectably mediocre about sums him up. Perhaps he should give Tom Stoppard a call.