We can't have Earthmen projecting themselves over here, leaping about... causing all manner of disruption. 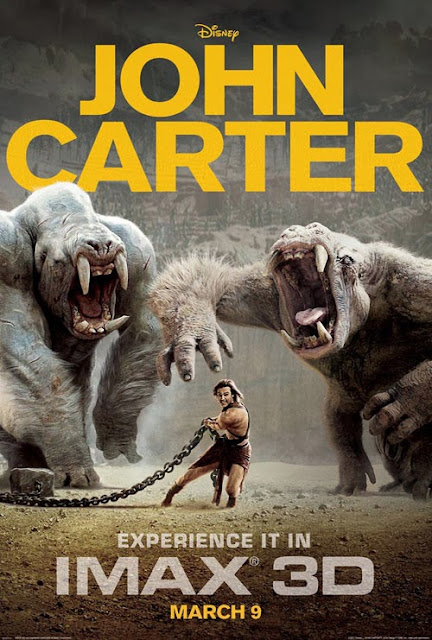 Most of the criticisms of Andrew Stanton's mega-budget folly are fair comment. It's a frustrating experience, as the failings clearly don't result from an indifference to the source material or the neutering influence of a nervous studio. John Carter has issues down the line from conception of storyline to casting, and you can only really level the blame at the door of its architect.

The problems with story and structure might seem less noticeable if Carter was played by someone exuding an ounce of charisma (perhaps venturing to ask for a pint, in a thin glass).

After all, it worked for Gladiator (although, in fairness, that film had a very clear through-line for its main character that this one lacks). But Taylor Kitsch can only bring pretty-boy looks and freshly-toned abs to the game. I thought he made a decent showing as Gambit in Wolverine, but the best I can say for him here is that he's competent. If he just about gets away with pouting about the surface of Barsoom, he looks ridiculously anachronisitic in 1868.

Stanton's managed to cast the rest of the film extremely well, which makes Kitsch even more of a disappointment. The problem for them is more one of limited characterisation and leaden dialogue. Lynne Collins (who was also in Wolverine) is much more impressive than her co-lead, while Samantha Morton and Willem Dafoe makes strong impressions as motion-captured Tharks. Thomas Hayden Church fares less well his one-note brute. Likewise, Dominic West doesn't get to do much more than snarl. James Purefoy is one of the few in the cast given a chance to inject a sense of fun into the proceedings; it's something of a Rome reunion, as Caesar to his Anthony, Ciaran Hinds, also lends support as does Polly Walker (as a Thark). The ubiquitous Mark Strong has a better role than as Sinestro in Green Lantern last year, and his scene explaining his role and manipulation of events to Carter is one of the best sequences in the film. But...

Like an awful lot here, he's not clearly defined. Perhaps the Therns are the same nebulous lot with god-like powers in the novels, but their motivation is nevertheless unsatisfying. They seem to do what they do just because they do and always have. They aren't evil so much as inscrutable puppet masters. Motivations elsewhere aren't strong enough to survive the number of narrative diversions that take place. Carter blandly hides a secret and vacillates over his allegiances, the Tharks threaten to kill Carter numerous times without ever going for it, the Princess is a shit-hot scientist/warrior but the writers are unable to have her explain the ninth ray clearly.

So too, the effects for Carter's superhuman leaps are impressive but the logic of what he can do appears to change with the requirements of the scene he's in. One moment he can have seven bells beaten out of him, the next he's killing with a single punch, or dispatching a white ape with ease. And I can't say I bought into his ruse involving the medallion; wouldn't the Therns know whether there are/where there are medallions littered about the Earth? Perhaps such issues result from being surrounded by yes-men, or not listening to no-men. For a film that spends so much time on set-up and introductions, willing to grind to a halt at points to engage in verbose exposition, to lack clarity in respect of basic motivations and parameters suggests Stanton ultimately couldn't see the wood for the trees.

Stanton succeeds with the world-building and vistas, but he still mostly recalls other movie worlds, be it Dune or (even) The Chronicles of Riddick. Barsoom is full of sand; there's nothing very exotic about it. And while he mounts the action in a consistently entertaining manner, it's rarely enthralling. The one scene that ignites, Carter's single-handed take-down of an army of Tharks (again, the issue with his variable abilities), is somewhat punctured by the intercut flashbacks to the fate of his family.

It's a shame this was a (relative) box office failure, as I'd like to see more science fiction/fantasy fare that has the confidence to take its audience to a fully envisioned new world. This one has more in common with a better-directed Krull than a new Star Wars, though. That said, Lucas would love the dog.