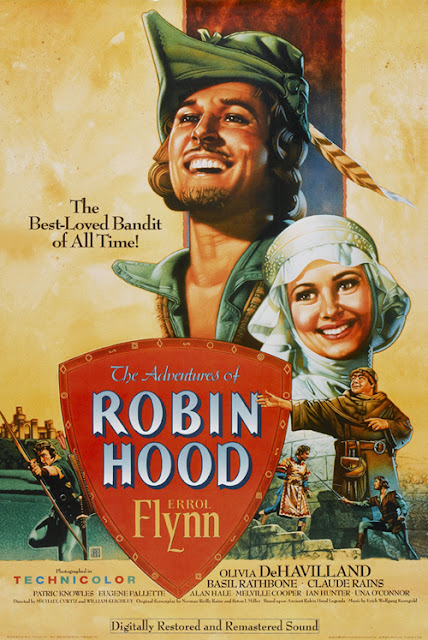 Errol Flynn playing Errol Flynn, bedecked in a pair of decidedly twentieth century green tights. Period authenticity is the last thing on Michael Curtiz’ mind, and for the most part this swashbuckling tale is breezy fun, if rather lacking in narrative urgency between your classic moments of Hood lore.

The highlight is probably the early encounter between Robin and Prince John, played with charming loucheness by Claude Rains, as the outlaw shows up at John’s castle with a deer wrapped round his shoulders and proceeds to act as if he owns the place – much to John’s amusement.

Debonair and irrepressible as Flynn is, it’s Rains’s show whenever he’s on screen, commanding with the attention through apparent indifference. He’s ably supported by Basil Rathbone’s thoroughly hissable Guy of Gisborne; Rathbone’s a good sport, graciously allowing Flynn to take the piss in scene after scene. As the love interest, Olivia De Havilland is luminous.