Just when I thought I was out... they pull me back in. 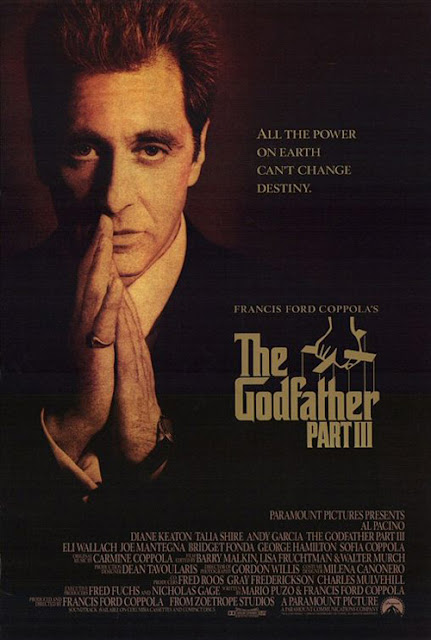 This is a solid conclusion to the trilogy, but it needed to be a lot more than that to live up to its predecessors.

Its most infamous failing is the casting of Sophia Coppola as Michael's daughter Mary. With Winona Ryder dropping out due to exhaustion, Coppola cast his offspring in a fit of nepotism that renders the film's love story inert. I feel a bit sorry for Sophia; she's painfully self-conscious in the role, and her father shouldn't have pushed her into that position. Laura San Giacomo, who was considered, would have been a much better choice.

In contrast, Andy Garcia is perfect as Sonny''s hot-headed son Vincent, and squares off against the also-great casting of Joe Mantegna as the new generation of Mafia. Bizarrely, De Niro apparently wanted the part of Vincent (Madonna put herself forward for Mary!).

The film's plot is actually very strong, based on the Vatican banking scandals and the (suggested to be assassination) death of Pope John Paul I. Added to that the struggling-to-stay-legit Michael and you have ample room for drama. And it does sustain the interest, but it just isn't as well crafted as expectations required it to be. Coppola didn't have enough time to finesse the script, and the pressure to meet a release date is evident in the finished film. The climactic set piece of multiple intercut hits has the ambition to top anything in the previous films but lacks precision in the editing and occasionally looks a bit clumsy.

Coppola only ended up returning to the series due to Zoetrope's financial woes (Tucker: The Man and His Dream had bombed), and with that kind of reluctance it's a wonder it's as good as it is. It's a great shame that Robert Duvall didn't show (the casting of George Hamilton was much-mocked at the time, but he turns in a perfectly decent performance); in the original script he was very much central to the story, set to inform on the Corleone family. But Duvall realised he was effectively the co-lead and asked for more money. And dropped out when he was refused.

Pacino's ageing acting occasionally descends into ham, and his stroking-out scene is particularly embarrassing. While he's never less than commanding it comes across as a performance in a way Michael in the previous two wasn't. Eli Wallach's okay as Don Altobello (I'm not sure Frank Sinatra would have been superior) but overdoes the "I'm an old, simple man" act. Of the returning cast, Talia Shire fares best, positioned now as supporter of Michael but power behind the new heir to the throne Vincent.

Ending the story with Michael's death is appropriate, but I would quite like to have seen the mooted fourth chapter, with Vincent's Don contrasted with the young Sonny. This plot line was originally considered for one of the many drafts that were suggested for Part III, many of which focussed on Anthony's involvement in crime (in the filmed version he shuns the life). There was even a 1985 script that had Eddie Murphy all but cast as Leroy "Nicky" Barnes.