No one murdered them - it's the war, the whole bloody war! We've just got to do these things and say our prayers at the end. 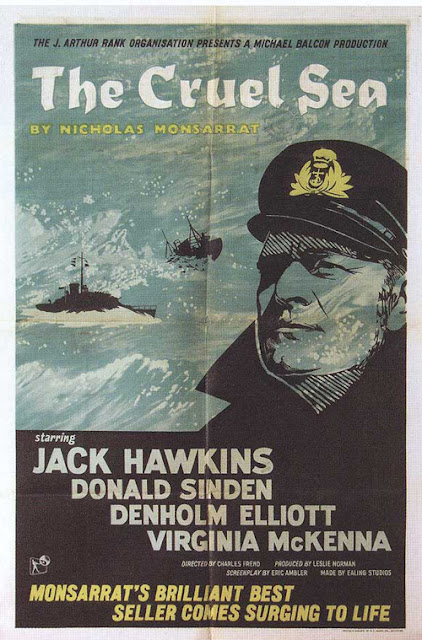 Perhaps due to distance allowed by eight years, or maybe just because of the focus of the script (life aboard for the men, and their duties, not the war itself), but for the most part this adaptation of Nicholas Monsarrat’s novel about a WWII corvette hunting U-boats is admirably free from both propaganda and classic notions of heroism. Also, 60 years later, it remains a frequently gripping experience; a testament to the approach taken, given the stodge frequently served up as WWII dramas during this period and beyond.

Jack Hawkins’s captain (ex-Merchant Navy) and Donald Sinden’s Number One are central, and their performances are beautifully measured. Hawkins’ captain barely lets the cracks show, meaning that when he’s affected we ,the audience, are too. Sinden’s more the sensitive, educated type, and you aren’t initially sure who among the inexperienced young officers will see the film through. Early scenes are devoted to Stanley Baker’s bastardly first lieutenant, a used car salesman in civvy street, so it’s a surprise when he exits the proceedings. Elsewhere, Denholm Elliot (a lawyer in peace time; the professions of the crew are as much signals of character as what we see on screen) is pre-occupied by his actress wife’s extra-marital pre-occupations.

The most powerful scene sees Hawkins decide to depth charge a suspected U-boat, despite the presence of British sailors desperately floating in the sea above. The cry of “Bloody murderer!” from one Hawkins’ crew, and the captain’s subsequent breakdown, are evidence of a script that is uninterested in steering towards the easy options for its characters. Repeatedly, Hawkins blames the harsh events that befall them on the “bloody war”; it’s not something to be glorified. And this appears to be underlined with the realisation that, over the course of five years, their achievement as a crew(s) amounted to the sinking of only two U-boats; perhaps not the most effective of countermeasures against the enemy. Tellingly, Sinden’s character is unconcerned by his lack of medals since he has Virginia McKenna waiting at home.

Other scenes deserve a mention; the sinking of the first boat and subsequent drifting for days in tiny dinghies on the open sea, all the while losing crewmen to the conditions; the gripping yet mundane search for a U-boat that Warden is convinced is out there, all the while accompanied by the hypnotic ping of the radar.