Santa's having some trouble getting the sled off the ground? 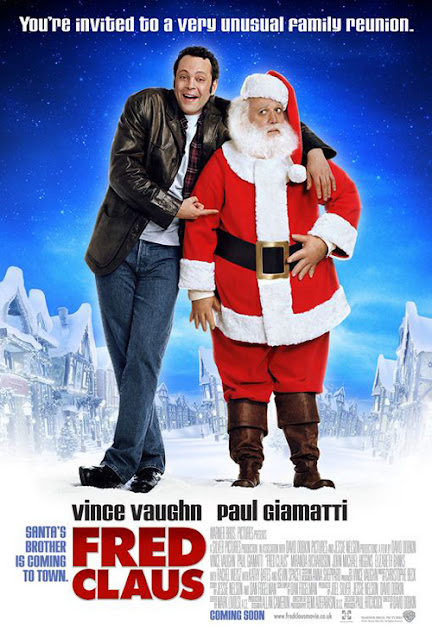 The pertinent question here is, “How does Vince Vaughn live with himself?” The answer is probably, “Quite comfortably” since he is guilty of repeat visits to the well of soulless yuletide cash-ins (the other being Four Christmases). The actor is seemingly a decade past any aspiration towards serious work and interesting roles. So he plays Santa Claus’ older, disgruntled brother. He humbugs Christmas until, in a pact to get Saint Nick to put up his bail money, he agrees to spend the festive season helping out down at the North Pole. And learns the true meaning of the dried up husk of celebrity he hangs onto.

If Vaughn had Bill Murray’s charm I might be charitable and suggest there was a Scrooged-esque intention to mock the trappings of yuletide. But the odd gag about Nick spending a suspicious amount of time with children aside, this lacks any balls (including the shiny bauble variety). It doesn’t even have sufficient drive to be convincingly saccharine, just hanging there limply, like an empty stocking.

The most baffling aspect is the presence of a variety of talented actors, forced to grin and gurn through this lifeless fiasco. Paul Giamatti plays Nick, Miranda Richardson his wife, Kathy Bates their mum, Elizabeth Banks a North Pole worker and Rachel Weisz (sporting a terrible accent, worthy of Dick van Dyke) is Vaughn’s girlfriend. Even Jeffrey Dean Morgan has a micro-cameo. Kevin Spacey almost makes his efficiency expert watchable (in a “I’ve done this part a hundred times before, but hey it’s a big fat pay cheque”) way), but the level of motivation on the writers’ part means we have no idea who sent him. I know, no logic is necessary, as it’s Christmas, but this is a film where the one half decent scene has Vaughn go to a meeting of Siblings Anonymous and no one believes he could possibly be Santa’s brother (present are a Stallone, Clinton and Baldwin).

Maybe David Dobkin, off the back of his solitary big hit attracted the cast, but Wedding Crashers now seems like a never to be repeated fluke. This features a scenario where Vaughn’s best pal is an African American orphan who wants a puppy from Santa. And there's a hilarious trio of ninja elves that beat up Fred. At every turn inspiration appears to have given way to “That’ll do”.

a trio of festive treats:

Don't bother with the above but give the following Christmas-set movies due consideration.

Scrooge (1951) ****1/2
A perfectly cast Alastair Sim makes this the definitive adaptation of A Christmas Carol, rather than due to any particular inventiveness on director Brian Desmond Hurst's part. Sim works the callousness, sadness and humour of the title character like the master he was.

Bad Santa (2003) ****
There are about three different cuts of this doing the rounds, although I've not seen Terry Zwigoff's preferred version (Zwigoff relishes being a downer). Billy Bob Thornton's irredeemable, alcoholic, incontinent mall Santa reluctantly discovers he has a heart when he meets bullied, isolated kid Thurman Merman. Incredibly profane, vulgar and very, very funny. And quite sweet too.