We'll be listening to you. 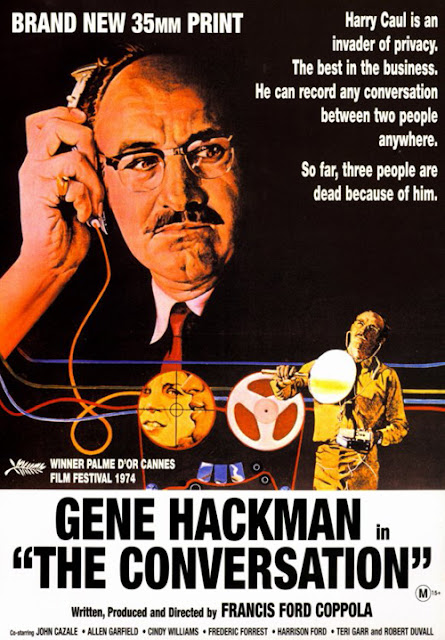 We first see him instructing Stan (John Cazale, playing a standard Cazale type) that it doesn’t matter what the nature of their recording is, or what the people they are listening in on are up to; he only wants to ensure the best quality possible is rendered. But by the end of the film the whys and wherefores are all he can think of, and the crucial twist is the icing on the cake; we have been so focused on the way he has viewed his subjects that we have all missed the wood for the trees.

This is Hackman’s show, but Coppola surrounds him with strong players in small roles; Robert Duvall, an impressively subdued yet threatening Harrison Ford, Frederic Forrest, and Bernie Moran as a fast-talking rival bugger. As Harry’s paranoia increases, so does the subjectivity of what he sees/imagines, and we move into Repulsion territory. I can see that some might consider the film as a whole to be a bit of a bore, but it exerts a hypnotic hold such that it remains in your head long after the end credits.