We're cops, everyone wants to kill us. 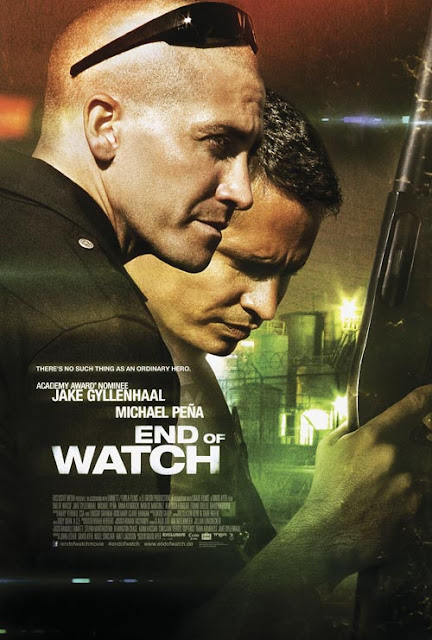 David Ayer likes his cop movies. As a writer he gave us dubious cops in Dark Blue and Training Day, and as a director sometimes ludicrously cast ones in Street Kings. Probably his best work as writer and director to date is Harsh Times, which starred Christian Bale as an ex-soldier finding civilian life difficult. Which is a round about way of getting to End of Watch, nearly but not quite a very good movie.

Part of the problem lies with the central semi-conceit (semi, because the film never pretends to be a found footage “proper” piece), resulting in an uneasy mash-up of style and content. The fly-on-the-wall approach works for much of the time, but as great as the central duo’s (Jake Gyllenhaal and Michael Pena) performances are (and they have an immensely winning rapport), I never less than aware that I’m watching Jake Gyllenhaal playing a cop (and giving his all to the part, I should add).

The aspiration towards gritty realism is frequently highly effective, but you’re aware of how the Ayers as write has constructed a more conventional narrative than the one that Ayers as director has created with its more dynamic elements of presentation.

So wee see the domestic lives of the officers, including Gyllenhaal’s romance with Anna Kendrick and Pena’s wife giving birth. And a succession of action set pieces that show the strong stuff the pair are made of, the most blatant of which is their rescue of three children from a burning building. Their subsequent conversation about how they don’t feel like heroes can’t remove the bad taste of over-manipulation as we see their awards for bravery, accompanied by stirring music. So too, the evil Mexican drug lord is shown plotting their demise through night vision goggles. But he clearly didn’t need much finding as he’s walking about wearing a sandwich board proclaiming “I am an evil Mexican drug lord!”

It’s also clearly a film extolling the nobility of law enforcement officials (perhaps Ayer felt it was time to redress the balance?) which at certain points feels like a bit of a stretch; these guys are cheeky and somewhat reckless, but they behave honourably in even the situations where you’d expect the rule book to be discarded (the prime example is their apprehension of a felon who has attempted to murder two fellow officers).

All that said, the fly-on-the-wall approach frequently creates an immediacy that ratchets up the tension, helped further by some inventive and mostly successful editing choices (on other occasions, not so successful; the gang’s AK-47s are unable to hit the fleeing cops despite their being easy targets). As we become aware that these officers are creating waves with the cartels a palpable sense of dread establishes itself, in a manner not so removed from the horror genre. And scenes in here wouldn’t look out of home in a fright flick; the discovery of shallow grave in a house filled with decapitated bodies, a call to a situation where an officer is found (alive) with a knife lodged in his head (through his eye).

Perhaps because a series like The Wire has created enough room to tell stories from a broader perspective, both the cop and the criminal, there’s a sense that perspective here is lopsided; the stylistic approach is hoodwinking us into thinking it’s presenting something accurate. Then we remember that the Latino gang are, like Gyllenhaal, videoing their activities. In contrast, they are presented throughout as strictly one-note caricatures.

Ayer’s created an intense, well-performed and frequently very funny film, but the verité style is essentially used to mask a script replete with all the standard Hollywood cop movie clichés and acts of artistic licence.