You can't pin nothin on me until you prove Corpus Delicious!


George Sanders is The Falcon 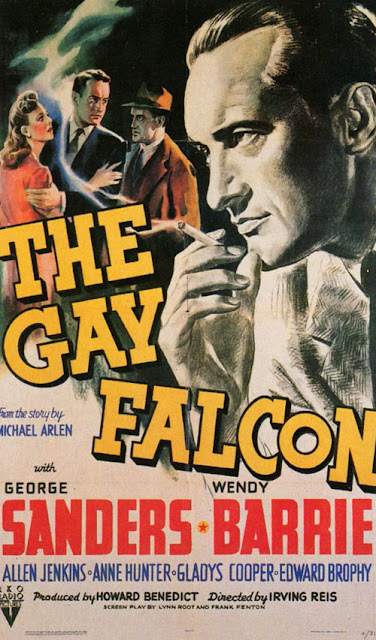 George Sanders, forced to jumps ship on Simon Templar, lands a new series that had Leslie Charteris suing RKO as being The Saint in all but name.

A fair complaint, but this is breezier and lively than all but Sander’s first Saint outing. He’s called upon to investigate jewel thieves working insurance frauds while at the same time acting something of a cad (surprise!) in respect of his fiancé (Elinor Beford, very funny); whenever her back is turned he’s smooth-talking the ladies including former Saint star Wendy Barrie.

As such, the plot’s really secondary to the interactions between the characters, be it plodding police, high society or criminal lowlifes. Sanders is a rakish delight as ever, but (again, as with The Saint) it’s his sidekick who steals the spotlight. Allen Jenkins as Jonathan G “Goldie” Locke.

Cop: You know me, I gotta heart.
Goldie: Yeah, Michael, I know you have, and I only wish you hadda brain to go wid it.

As for the title, Gay is the Falcon’s first name (his last is Lawrence). 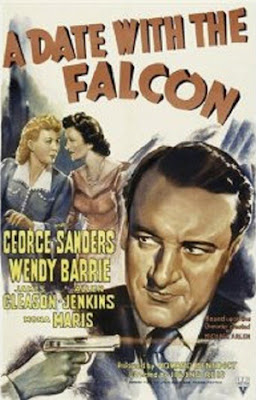 Second Falcon outing sees the Falcon on the trail of a gang that has kidnapped a scientist with a formula for creating synthetic diamonds. Wendy Barrie and Allen Jenkins return, but the highlights this time are all Sanders’.

These include getting himself arrested to evade his captors and climbing out onto a ledge five stories up to avoid the police; the onlookers seem very keen for him to jump. By the time Sanders meets Mr Big, solving the case is firmly in second place to comic set pieces and as such it’s a bit of a letdown. 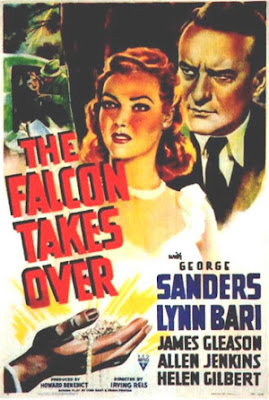 The best of Sander’s Falcon films involves him in a plot partly inspired by Chandler’s Farewell My Lovely. Setting events in motion is a none too bright wrestler, Moose Malloy, busted out of prison and looking for a dame who said she’d wait for him. Before long there’s a trail of bodies and a fortune telling racket to investigate.

Moose is clearly played by an actor in a padded costume (reminiscent of Russ Abbot’s gangster character), but the more atmospheric scenes are highly effective and there’s a clearer divide between the serious plot and the larks than in previous installments.

Allen Jenkins is on great form as sidekick Goldie, in perpetual fear of Moose putting his hands round his neck and squeezing the life out of him. And, as with the first film, his grillings by the police result in some highly amusing exchanges. Inspector O’ Hara’s repartee with his dimmer than dim assistant Detective Bates also provides yuks. As for the Falcon, he’s engaged here but not averse to disreputable behaviour whenever the situation provides an opportunity. 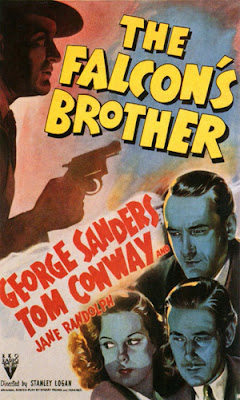 Disappointing final outing for Sanders. He’s bashed on the head early on, and his brother Tom (played by Tom Conway, Sanders’ actual brother) takes over the investigation.

Conway’s at best passable and he doesn’t even have the support of Goldie to lessen the blow. Instead we get the going through the motions Lefty (Don Barclay). Inspecter O’Hara’s also gone, with only Detective Bates remaining. Keye Luke plays the Falcon’s butler, who speaks pigeon English to anyone he doesn’t wish to take a telephone call from. The plot involves German spies, which should be entertaining but isn’t. The Falcon makes a very decisive exit from the series, but in a peculiarly badly staged manner.