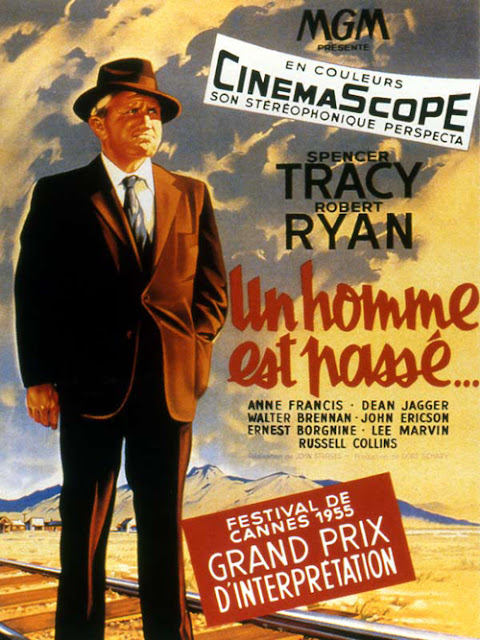 I’ve seen comments suggesting that John Sturges’ thriller hasn’t aged well, which I find rather mystifying. Sure, some of the characterisations border on the cardboard, but the director imbues the story with a taut, economical backbone.

The premise is compelling in itself, possessing a certain High Noon quality, as Spencer Tracy’s one-armed man arrives with questions in a stark, dilapidated, dustbowl town where he is made to feel instantly unwelcome. This soon turns to realisation that he’ll be lucky to escape with his life, yet the genial Tracy turns the other cheek and resists all attempts at provocation. Until a memorable confrontation with Ernest Borgnine (who, with Lee Marvin, expertly essays repellent thuggery), when he unleashes his Judo moves. Robert Ryan represents slightly more eloquent, but no less brutish and ignorant, villainy as the controlling figure in a town hiding a dark secret.

One of the issues raised in the film, the (mis-) treatment of Japanese Americans, stands out not only because of the period in which the film was made (1955, set in 1945) but because it has been broached so rarely since. On the downside, Andre Previn’s score is intrusively omnipresent.