Babies on bayonets? What would be the advantage? 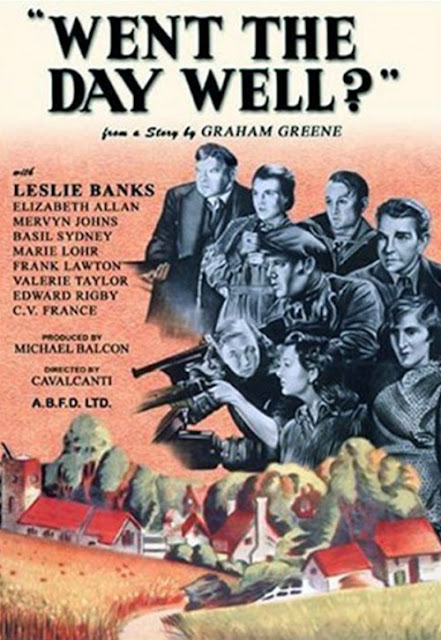 Striking WWII propaganda film, co-written by Graham Greene. A platoon of German soldiers, posing as British troops, take over a rural village but the locals fight back.

Aspects of the scenario are not too far removed from the more recent The Eagle Has Landed, but Albero Cavalcanti (who later directed The Ventriloquist’s Dummy sequence in Dead of Night) keeps the scenario chillingly feasible; the bookend structure finds a man standing in a graveyard, recounting the main events. It is some time after the war, and he is explaining how a gravestone came to have German names on it. This device lends a feeling of authenticity to the proceedings; the subsequent escalation of events is gripping even if the characterisations are strictly subservient to the plotting.

The Germans are depicted as a fairly deplorable lot. They father kids out of wedlock, and don’t even care! And they think nothing of killing children (even if they see little purpose in bayoneting babies).

The film still has the power to shock; the countermeasures taken include axing a German to death. Then there is the spurned lover who frenziedly shoots the paramour she learns is a German agent. One of the characters calmly removes from the room a grenade that has just landed, closing the door behind her. Seconds later it explodes. The harsh brutality of these sequences contrasts with a more gung ho approach elsewhere; Thora Hird’s Land Girl cheerfully starts keeping a score as she picks off Germans (although, to be fair, Elizabeth Allan’s character is momentarily appalled when she realises that she has killed one of the enemy).