I am going to be the biggest Austrian celebrity since Hitler. 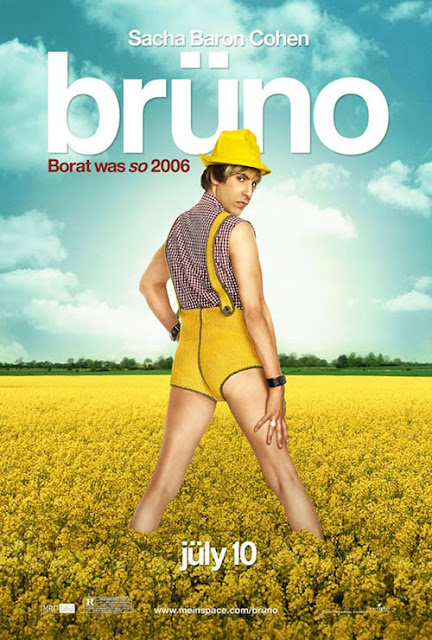 I wasn’t the biggest fan of Borat, so I’d been in no hurry to see Sacha Baron Cohen’s “different character, same formula” follow-up. Part of the problem is that Cohen’s gay Austrian fashionista is only designed to shock, which quickly grows tiresome and repetitive. This may have been part of the Borat act too, but it was only a part. The character of the Kazakh TV reporter used a benign ignorance to expose prejudice and bigotry, whereas Bruno’s aggressive flamboyance immediately dictates how a scene will develop.

All Cohen can then do is confront obvious targets with a sledgehammer. The cruder he gets, the less he makes his subjects look foolish and the more he seems like a bit of a dick for thinking this was other than a lazy exercise.

Occasionally character and scenario do snap together to revealing, humourous and disturbing results; Bruno questioning parents on what they are willing to let their children do for a role in his African child’s video reaches an appalling height when a mother assures him her 30 pound child can lose 10 pounds by the end of the week. But more often his focus seems entirely pointless (Bruno’s visit to the Middle East to broker peace) or just plain mean (ushering Ron Paul to his bedroom). I've tended to think there’s something rather cruel about the whole premise of ensnaring the unaware (however deserving of ridicule they may prove to be), ever since the witless horrors of Beadle’s About.

Ultimately Bruno doesn’t amount to much more than that kind of vacuity. Ironically, the opening 10 minutes, when Cohen is more self-contained and fixed on the fashion world, are some of the funniest; destroying a show with his Velcro suit, his love affair with pygmy flight attendant Diesel. If he’d gone The Dictator traditional comedy route, it might have worked better overall.

There are a number of occasions when Cohen is clearly risking his safety but you’re left wondering what the point would have been if he had come to harm; being a provocateur to expose a crowd of rednecks as rednecks is hardly the height of satire.

And, when it comes to the finale, the master comedian is revealed to be just as in the thrall of the celebs he’s mocking. He wheels on various musicians who no doubt count themselves as fans to produce “Dove of Peace” (including Bono, Elton John, Sting and Snoop Dogg); Dennis Pennis would never have stooped so low.