You were sent to Auschwitz because you stole a ham? 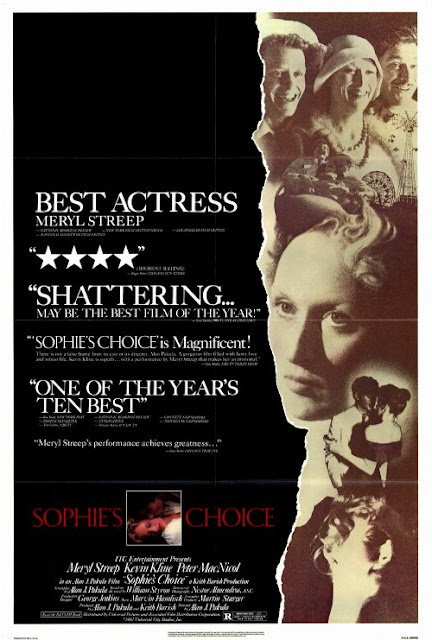 Alan J Pakula’s Holocaust drama presumes its own importance but doesn’t pause to consider the almost wholly turgid result. Yes, the central scene (which provides the title) is powerful. But it is unable to justify the entire film; indeed, there is a strong disconnect between the indulgent thespian antics of the US sections and the flashbacks to Poland.

It could be that William Styron’s novel explores its themes more successfully but this adaptation consistently flies its colours as a literary construct, employing several layers of unnecessary artifice when the premise is potent enough. There’s the decision to make Sophie (Meryl Streep) Polish Catholic (apparently because Styron wished to emphasise that the actions of the Nazis were not limited to the Jewish people). We then learn that her law professor father was aggressively anti-Semitic, and then that Sophie was sent to Auschwitz for stealing a ham. Sophie’s lover Nathan (Kevin Kline) is Jewish and schizophrenic. There is a heavy-handed irony to the situations that have been created, seemingly at every stage. The intent appears to be to make Sophie and Nathan’s relationship poetically tragic (the highs of flights of fantasy and the lows of that ghosts of the past, depression and storming arguments) but they are never believable. This sense of design is added to by the use of a narrator, also the third person in the love triangle; young would-be author Stingo (Peter MacNicol, best known as Biscuit in Ally McBeal).

For a director whose low-key realism was a defining trait during the ‘70s, Pakula seems unable to rein in his actors. Streep accents her way to a second Oscar, aided by the make-up department delivering a ghostly pallor and severe haircut. Kline showboats like crazy (if you’ll excuse the choice of word), and it’s easy to see why John Cleese was inspired to re-apply this energy to comic effect in A Fish Called Wanda. In a comedy, a performance that feels like a performance can be fine; in a serious-minded drama it’s just distracting. MacNicol, meanwhile, is saddled with a character of such insipid naivety he makes John Boy Walton appear worldly-wise. Accordingly, he irritates throughout. The trio lack any qualities that would encourage the audience to invest in their experiences.

The script employs various reveals in relation to the characters, in addition to the tricky flashback structure. These are momentarily effective but can’t compensate for the pervading sluggishness. It’s become a cliché that films about disability or the Holocaust are Oscar bait, but here the accusation seems justified. Sophie’s Choice is overwrought and underwhelming.