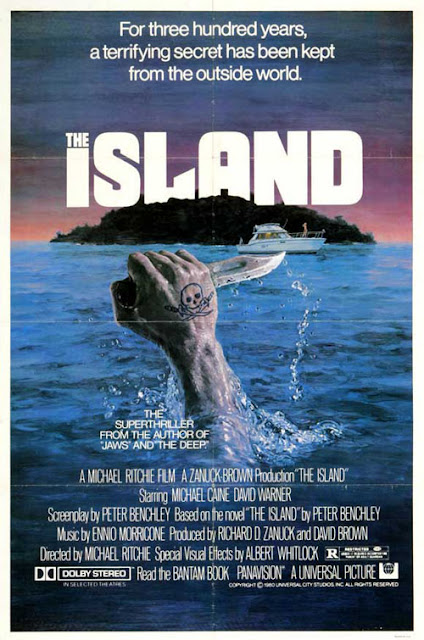 Not the Michael Bay one. For all the general position that Caine's career choices were pretty much toilet between the mid-‘70s and late ‘80s, this doesn't really stand up to analysis. He was as erratic as at every other stage of his career; here, though, he brings conviction when all around him are flailing wildly.

Michael Ritchie's modern-day pirate tale (courtesy of water-logged Peter Benchley) definitely has its drawbacks, not least the rather turgid performance of Justin Maynard as Caine's son, turned to the dark side by a solid-enough but phoning it in David Warner. There's a delightful line-up of gnarly-toothed British thesps including Don Henderson and Dudley Sutton, but the plot as it is consists of abused and humiliated Caine trying to escape and trying to escape again.

Ritchie's always been an erratic director (settling into, or being forced into a comedy niche in the ‘80s) and he's clearly not sure of his tone here; is it black comedy, serious drama or some kind of satire of the nuclear family? Highlights include a particularly disturbing attack on a yacht where one of the occupants gives a five-minute Kung Fu lesson to the pirates (it manages to be both hilariously out-of-joint and compelling at the same time) and Caine's final revenge (Straw Dogs style). Oh, and I wouldn't have known it was a Morricone score.

Now, the most terrifying thing in the water is...