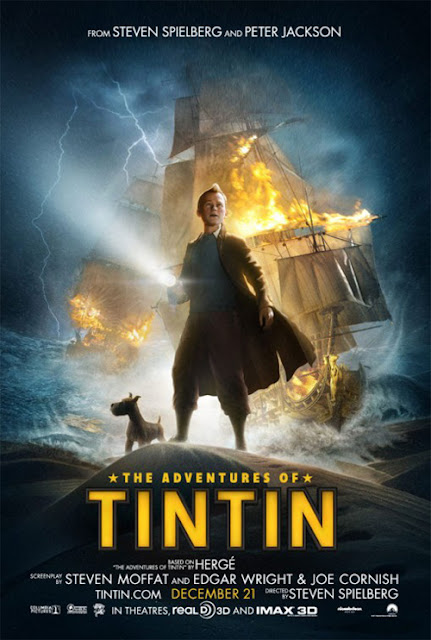 The Adventures of Tintin: The Secret of the Unicorn
(2011)

Spielberg back on form in the dead-end, dead-eyed motion capture format that nearly did for Robert Zemeckis? Well, pretty much. I saw this in 2D, and I came away intrigued by how the 3D experience might have been, as the director clearly had a keen sense of how to use the format for vertiginous thrills.

The biggest relief is that each action sequence has the same mixture of edge of the seat thrills and humour that was Spielberg at his signature best in the Indiana Jones trilogy, and seemed to have deserted him in the fourth film. John Williams' score very much echoes that drama/humour quotient too.

Added to that there's a witty, inventive script from Steven Moffat, Joe Cornish and Edgar Wright that never takes the easy option of going all post-modern (it must have taken restraint for those three) and seems to revel in the period. If there's a nitpick there it's that the big - giddy - climax occurs without you realising that's what it is, and then we're pretty much into epilogue.

Performance and character-wise this is Andy Serkis' show, and Haddock's perpetual quest for inebriation is the source of the best jokes and sequences. Runner-up is Snowy, almost as lovable and certainly more fun than Tintin. I couldn't work out which of the Thomsons Pegg and Frost were playing, which is probably appropriate.