Captain America! How exciting! I'm a great fan of your films! 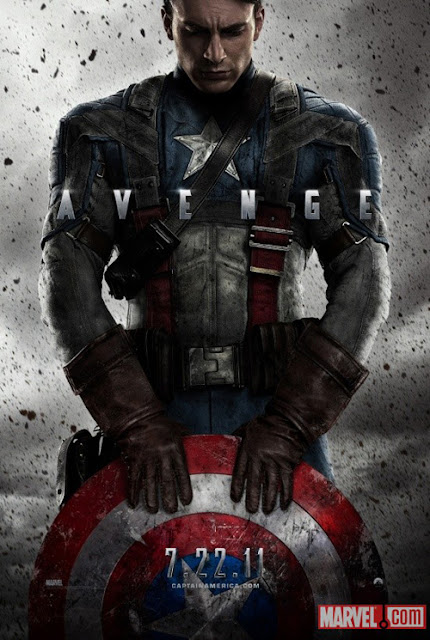 Fairly underwhelming, as is to be expected from Joe Johnston (when Jurassic Park 3's the best film on your CV, that's saying something). Partly it's because the script just isn't there, only sporadically showing anything approaching a brain beneath the desire to hearken back to the days of simple all-American values.

Partly it's because Johnston directs with no verve or inventiveness. The action scenes are mostly leaden in staging (but when so few of the scenes, the initial chase by the newly formed Captain aside, have any narrative propulsion to them it isn’t that surprising) and there's little to make you care about the action. Alan Silvestri's score helps matters not-at-all, attempting some approximation of swelling pride but sounding like a cookie cutter superhero movie piece.

Steve Rogers himself is fairly engaging pre-transformation, if rather insipidly patriotic. Indeed, right through until he becomes Captain America-proper (including a fairly shrewd sequence where he's put to work selling war bonds) the character has potential. But once he's the Captain – then the character and any drive the narrative had cave in. Nothing fuels the story apart from a one-note romance with a fairly irritating proto-feminist sidekick and a by-the-numbers pursuit of a wasted Hugo Weaving as Red Skull. Interest only revives again in the epilogue.

Chris Evans is decent enough, but it's a bit daft casting someone naturally witty in a role where they get to display zero charisma. It's also baffling that, for an introduction to a superhero, there is so little sense of what makes him special. Just how strong/fast/skilled is he? He can run a bit, punch a bit, but nothing that provokes more than a shrug.