Come to me, Superman! I defy you! Come and kneel before Zod! 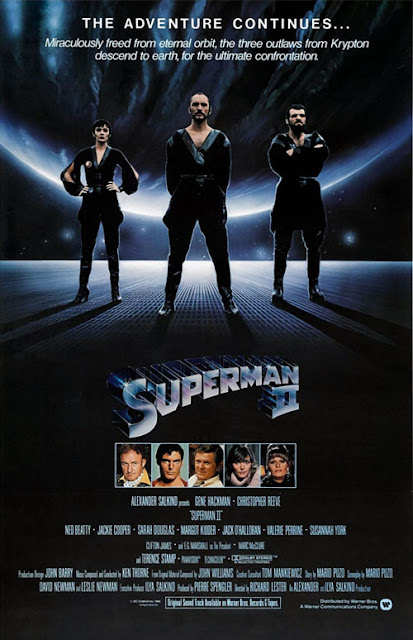 Justifiably regarded as the best of the Reeves movies, this sequel nevertheless is a bit ragbag. The compositions and editing are hit and miss, reflecting the messy production, so it’s fortunate that the premise is watertight.

Richard Donner was replaced by Richard Lester who went in the opposite direction to Donner’s epic feel, favouring static shots and hiring Michael Winner’s (!) cinematographer. Main villain Terence Stamp (“Kneel before Zod!”) is marvellous, even if his smarts are more to do with Stamp’s innate classiness than the writing. If Jack O’Halloran’s Non is in the worst Jaws tradition, Sara Douglas makes a very sexy Ursa. Hackman’s Lex Luthor is a fairly unnecessary presence (tellingly, he didn’t return for any of Lester’s filming).

Because of the – at best – journeyman production values, this hasn’t aged very well, but it still has the series’ most iconic moments and characters. I even like the ultra-cheesy return to the diner where Clark beats up the trucker (wouldn’t that be beneath one of such high-mindedness?). The “Superman loses his powers” plot thread is a little perfunctory; it needed to amount to more than one scene to really have an impact, and as such reflects the likeable tattiness of the film as a whole.