Do I laugh now, or wait 'til it gets funny? 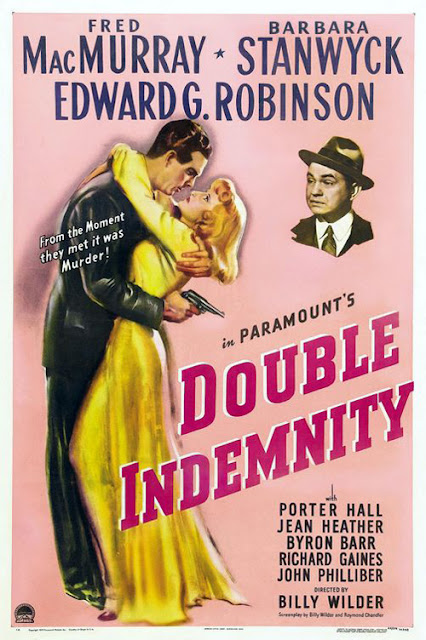 MacMurray's character has a very un-hardboiled name (Walter Neff) and MacMurray isn't the most obvious casting (I was trying to come up with a modern equivalent, based on him usually doing comic fare and I settled in Paul Rudd). Stanwyck's not a great beauty, but she is very sexy, especially in her entrance scene. I'm fairly stunned that the duo's plan worked as well as it did, since it's rife with unforeseeables (such as timing throwing a body off a train in just the right spot, which means not being interrupted and not having any spectators); you'd almost think that MacMurray was trying to come up with the most fraught scenario possible.

Once the deed is done, the pleasure is all about the suspense of unravelling plans and burgeoning paranoias. Wilder co-wrote the script, based on James M McCain's novella, with Raymond Chandler and the construction cleverly keeps the audience at the same level of knowledge as MacMurray throughout. I think there's only one instance where we are let in on something that he is not, and it's an understandable lapse given the requirements of the scene.

Edward G Robinson is excellent as MacMurray's insurance investigator pal, who can smell something fishy; the friendship between the two of them is the real heart of the piece. This one of those films where parodies of its voiceovers and patter since can cause you not to really hear how brilliant the writing is (the conversation about "speeding" between Stanwyck and MacMurray at their first meeting is sublime). Look out for Richard Gaines hilariously OTT delivery as the boss of Robinson and MacMurray who makes a hash of things.