Ferdinand the duck, witness to insanity. 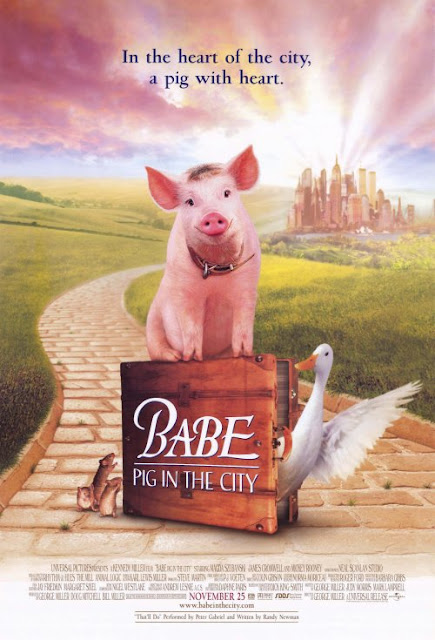 George Miller seems to have a knack for box office oblivion with sequels to family films. Happy Feet 2 met with extreme indifference, whereas Pig in the City was greeted with outright rejection. Arguably, neither film merited a sequel but Miller’s choice to take the sheep pig on a twisted journey into the heart of darkness is at least unexpected and unyielding to the sensibilities of the little darlings who were its target audience.

Alarming also that Babe sets in motion the chain of danger and disaster when he hospitalises Farmer Hoggett. With the threat of foreclosure on the farm, he is sent with the farmer’s wife to the Big City to display his talents in a show with the promise of payment. Things don’t go as planned, however, and before long they end up lodging in animal-friendly hotel replete with all sorts of waifs and strays. Babe’s presence there is also a negative, leading to the occupants being captured and imprisoned (for animal testing?) The film is chock full of mortal thoughts, including a bull terrier that nearly drowns and a crippled dog with wheels experiencing heavenly fields before being called back.

Even if Miller doesn’t follow through with a downer ending, it’s admirable in a way that he was willing to go where he does. As precedents in his work go, there’s the same garish sense of humour on display that was evident in his earlier Witches of Eastwick. For the most part the film is engagingly surreal, even if the slapstick antics of Mrs Hoggett at the climax test the patience.