I don't recognise myself. 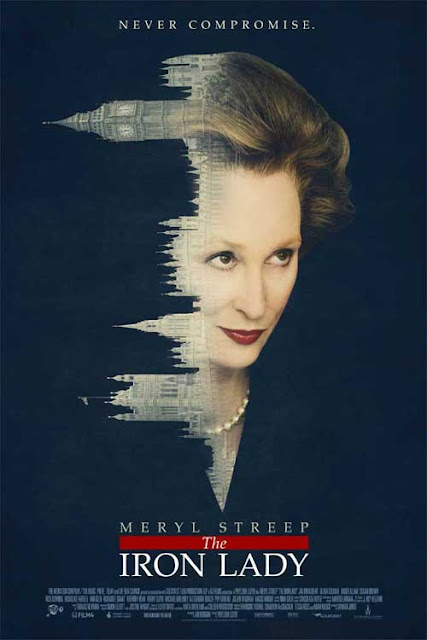 Maybe there are only so many ways to approach a biopic, but the results in the cases of both J Edgar and this failed to impress me. So much is made of the fictionalised element in both cases that I had to wonder what the attraction to the material was, other than there not being a movie made about them thus far.

Showing the human figure behind the public person is all very well as a premise, but I don't think I took away anything I could call insightful. There was the need for Maggie to live up to daddy, and her parents (mother in particular) not being openly affectionate. And the woman in a man's world. But events were dealt with in bite-size chunks, aware that each needed acknowledgement in her story but nothing more. The only time that the film felt it had any energy was during the poll tax riots and Thatch's subsequent downfall.

Most of the time the direction from Phyllida Lloyd is alarmingly heavy-handed, falling back on montages backed by rousing music rather than anything more challenging. Alzheimer's suffering present day Thatch seems like a sub-Alan Ayckbourn indulgence, and with Dennis' ghost mugging about the place seems to be suggesting it's okay to like her now she's losing it.

Where the film is wall-to-wall solid is in the performances. Streep is outstanding, too good maybe, at imbuing Thatcher with humanity. Alexander Roach and Harry Lloyd are also excellent as the younger Maggie and Dennis. Lloyd in particular wipes the floor with the mugging Jim Broadbent. Some good support too from the likes of Tony Head, Olivia Colman and a bizarrely well-cast Richard E Grant as Michael Heseltine.