I never thought I'd say this on American soil, but the Rooskie's right. 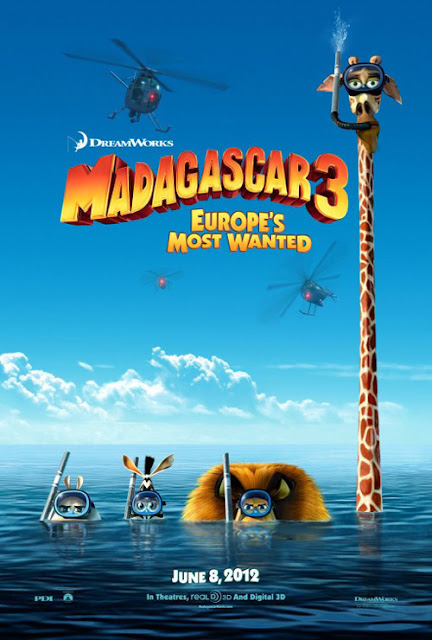 Eric Darnell and Tom McGrath have shown remarkable dedication to their escaped zoo animal animated franchise, returning to steer each of the sequels (here joined by Conrad Vernon). As such, the formula is tried and tested; bring back the four main players (Stiller, Rock, Schwimmer, Pinkett Smith), let the support steal the best gags (Baron Cohen, Cedric the Entertainer, McGrath as the penguin leader), ensure there are multiple hyperbolic set pieces and sprinkle liberally atop all of this a number of Euro-cheese dance tracks. Oh, and don’t forget to include a dollop of sentiment/moralising.

This is the DreamWorks formula, and whether it is more or less successful creatively it usually pays off in box office. Indeed, careening from this path hasn’t enamoured their shareholders (see Rise of the Guardians), although it could be argued that if they tried to stretch themselves a bit more they’d have more critical successes like How to Train Your Dragon. Madagascar 3 is perfectly serviceable and often very funny, but it’s largely indistinguishable from the previous installments (I say that having enjoyed both of them, which is just as well as they seem to be shown on a loop on TV).

This time round, the quarter follow the penguins and monkeys to Monte Carlo (it appears that they got there just by swimming, whereas the penguins flew by plane; given the travel difficulties established later in the film, it’s just as well this is glossed over) to persuade them to return to New York. Almost immediately they are subject to the unwanted attention of Chantel DuBois (Frances McDormand, excellent) an Animal Control officer who has been amusingly rendered as both ungainly of body and super-agile. It’s unfortunate that the highlight of Madagascar 3 is the breathless, hilarious chase sequence that takes up the first 20 minutes. It’s *****-star entertainment, and one of the studio’s greatest achievements to date.

After that, alas, things turn fairly run-of-the-mill. The characters join a travelling circus, and of course there are lessons to be learned, friendships to be tested and Animal Control to be dodged.

The main guest vocals all acquit themselves splendidly; Bryan Cranston is Vitaly the Russian hoop-diving tiger, Jessica Chastain plays a rather sexy leopard and Martin Short is an endearingly dim sea lion, Stefano. Nevertheless, as usual it’s Sacha Baron Cohen’s lemur who steals the film. Julien’s romance with a performing bear is both ridiculous and delightful. Elsewhere the penguins’ strategies are ever-inventive, but the prize ruse must go to the monkeys disguised as the King of Versailles.

Enjoyable as the Madagascars are, they should really probably call it a day on the franchise now. The anarchic impulses of the supporting characters tend to be balanced by the more melodramatic pursuits of the leads (albeit, Rock’s zebra usually gets to embrace the crazy) and there doesn’t seem to be much place left to take the former (particularly with the finale taking place in New York).

It’s fashionable to embrace Pixar and deride DreamWorks, but nothing is that simple. The first Shrek and How to Train Your Dragon rank with the very best CGI animation and, while Dreamworks’ tendency to sequelise is lowest common denominator, Pixar has now followed exactly the same pattern. I wasn’t all that taken with the Kung Fu Pandas, but I’d watch them any day over Cars and Cars 2. Perhaps the best compliment I can give the Madagascar series is that when I inevitably find one showing on the box I give it at least a couple of minutes before switching over.