I shall give this wretched world the queen it deserves. 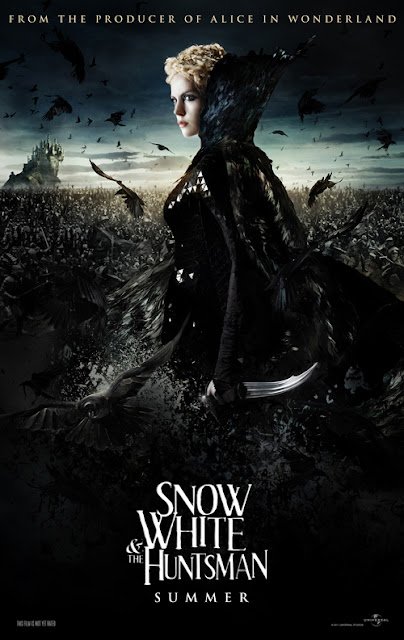 Rupert Sanders brings a certain panache to his directorial debut, but he's ultimately subdued by a blandest-of-the-bland script. There is a sense of committee management to elements of design and casting that prevents it ever getting beyond the slightly derivative.

They cast Kristen Stewart because she might bring in the Twilight crowd, not because she can hold a candle to Charlize Theron or look remotely convincing wielding a sword. And they design the world to echo The Lord of the Rings, complete with pitched battles, to promote the idea that this is the next big fantasy epic. On the other hand, Chris Hemsworth - complete with dubious Scottish accent - may have got the part off the back of Thor but he makes it more interesting than it is on paper.

The dwarves, composed of a fine bunch of actors, are mostly underwritten and under-used (but the little people effects are blended in more seamlessly than LOTR's hobbits). At least Theron's Ravenna provides a much-needed contrast to Stewart's simpering ineffectuality (the latter's rousing speech to her troops has to be the most laughably delivered pep-talk since Keira Knightley's in World's End) and Sam Spruell makes a strong impression as her devoted brother (I can see Spruell deservedly earning a lot of parts due to this turn; I hope they're not all bad guys, though). Sam Claflin, in contrast, is incredibly wet as Snow White's childhood chum.

Sanders visuals are most memorable, however. From the hallucinatory weirdness of the dark forest (inhalation of spores causes drippy, surreal imaginings - just the sort of edge the retelling of a fairy tale needs) to a magnificently rendered troll and a mossy tortoise. While the odd touch of inventiveness remains in the second half (the glassy defenders of the queen reminded me of something out of Krull), it mostly retreats to a pedestrian climax of swordplay and confrontation.

For all it's faults, Gilliam's Brothers Grimm is probably still the best of the big studios' attempts to plunder fantasy for that elusive LOTR dollar. Mainly because it retained a sense of wit and playfulness (albeit much meddled with). Huntsman tries so hard to be serious and epic that it forgets to have any fun.