I was blind, but now I see. 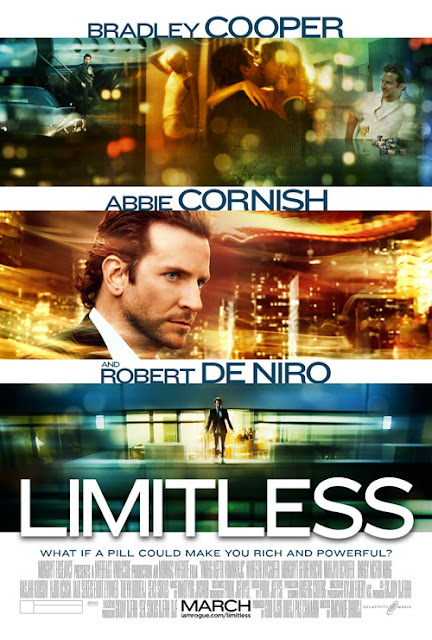 Neil Burger directed the stage magician film a few years ago that wasn't The Prestige, The Illusionist. This may lack that film's measured intelligence in its script, but Burger's visual skills have only grown (the extra star is for the energy and smarts he brings to the movie on that front).

Bradley Cooper's (solidly cast) bleary-eyed, scruffbag blocked writer is given a wonder pill by his ex-brother-in-law and it gives him a four-digit IQ overnight. What can't he do with his new-found skills? Shag his landlord's wife, write his novel in an evening, get back with his GF Abbie Cornish for starters. And then he starts making money.

It's the one-note use of his talents and limited trajectory of the script that prevent this from breaking out into something truly interesting. As it is, it's an expertly made SF thriller (the original title was the more genre The Dark Fields), but it's hampered by the inevitable trappings of cautionary tales of drug abuse and the need to make its genius protagonist an idiot when it suits the narrative (come on, borrowing money from a Russian mobster?).

There's an alternate ending on the DVD that isn't vastly different, but lets say it's more in keeping with what we know of NZT through the course of the film. De Niro banks his cheque. Oh, and there's a great cameo from Anna Friel as Cooper's ex-wife.