I'm a Bondurant. We don't lay down for nobody. 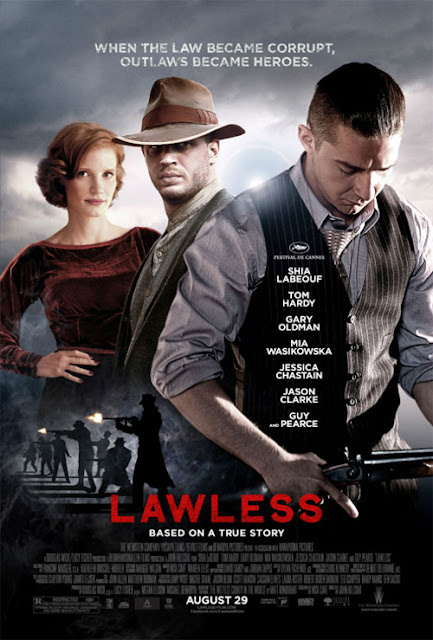 Based on a true story, three brothers running a bootlegging outfit during the Depression refuse to pay a cut to the authorities. Which results in escalating violence. John Hillcoat and Nick Cage have some form together (The Proposition) but Lawless is a bit of a mess.

The film’s unsure how it wants to present the brothers so ends up relating events nominally through the eyes of the youngest, played by Shia Le Beouf. Le Beouf can act, but he’s has an annoying cockiness about him that is accentuated here by playing an annoying cocky little character. Events revolve around him being a bit of a dick, but as the protagonist Hillcoat and Cage need to give him a chance to learn or grow. He’s responsible for opening up their business, but we barely glimpse the bigger picture of the brothers selling and running liquor across state lines. Gary Oldman has a couple of scenes as a big-time gangster, making you think something went wrong structurally along the way. Instead, significant time is devoted to a sappy romance between Le Beouf and Mia Wasikowska.

In contrast, the relationship between Tom Hardy’s older brother and Jessica Chastain’s waitress is much more thoughtfully played out. Hardy is outstanding, a taciturn bear of a man who appears to believe his own hype about indestructibility. Chastain’s troubled past is never detailed, but with her nuanced performance it doesn’t need to be. In contrast, we get no insight to Jason Clarke’s drunken third brother, other than he turns into the Tasmanian Devil when called upon. Chronicle’s Dane DeHaan also makes a strong impression as Le Beouf’s best friend.

The tone shifts awkwardly from extreme violence (throat slittings, ball-removals and a tarring and feathering – the latter no less disturbing for being slightly less extreme than the one in Carnivale) to guileless romance. And, to add further disorientation, Guy Pearce’s breezes in camping it up and twirling a metaphorical moustache as a cartoonish ghoul of a Special Deputy who becomes the brothers’ nemesis.

The eventual showdown is so ridiculously over-the-top (albeit based on an actual event) that you end up wondering what Hillcoat was aiming for, or perhaps he’d lost his bearings. Pearce is entertaining, but his take feels misjudged; maybe he decided that the only way to compete with Hardy was to go bigger.