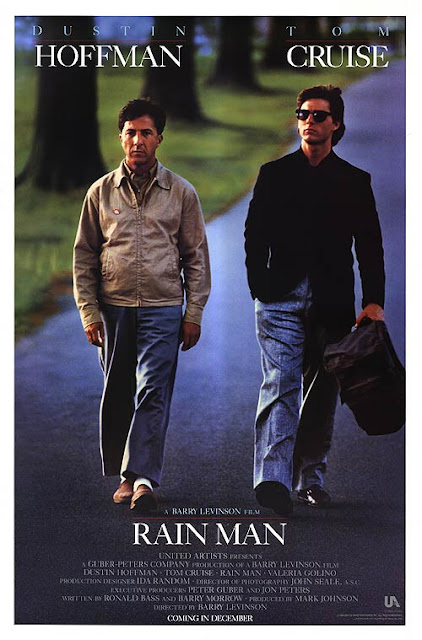 Barry Levinson’s film isn’t free from the occasional grating montage or grandstanding fantasy sequence (Charlie and Raymond winning at the casino), but generally it stands the test of time remarkably well. A development hell concept that became a monster hit when it finally got made, it's a rare star-led movie with a brain and willingness to feature unlikeable characters.

Tom Cruise's Charlie Babbit is selfish prick and Cruise is commendably willing to play that aspect up; in retrospect this and Born on the Fourth of July seem like his peak moments as an actor (rather than a star), when he was hungry for challenging material. I'd even go as far to say that Cruise is more impressive than Hoffman; he has to do all the heavy lifting in the "straight man" part, playing someone who epitomises '80s “me” attitudes as much as Michael Douglas' Gordon Gekko. Yes, there's some heart-warming redemption, but you don't really believe he'll keep up with visits to his new-found brother.

Hoffman's great in an awards-baiting part, of course, but you expect nothing less (although after this point, like De Niro and Pacino, he becomes increasingly content with just showing up). I'd forgotten Valerie Golino was in this too; whatever happened to her? She's adorable here, but seemed to vanish post-Hot Shots.