I'm working on something that will change the world, and human life as we know it. 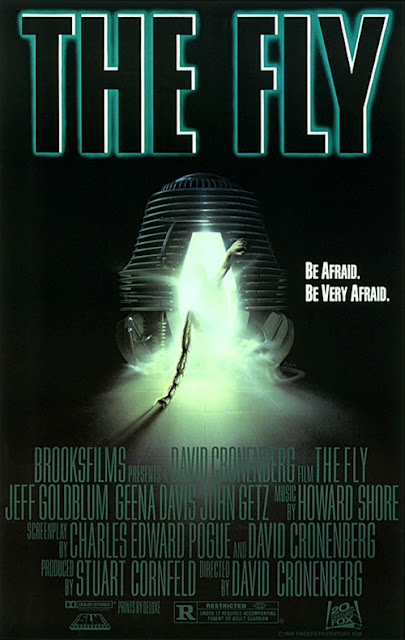 Yeaaaaaars since I’d last seen this, but my take is about the same. The first two-thirds are five star-worthy, and key to this is the chemistry between real-life-couple-at-the-time Jeff Goldblum and Geena Davis.

Goldbum’s Seth Brundle is never as bookish as he probably was on paper, mainly because the actor’s such a ball (well, gangly streak) of energy. Nevertheless, he’s superb in a career-defining role and essays Seth’s transformation, first emotionally and inspirationally and then physically, with complete conviction and not a little humour. Davis’s Veronica is cast as the muse but identification shifts to her at about the time she, rather than Seth, realises what we saw as it happened; that something is very wrong with Brundle.

It can be explained away, but Seth the scientist remaining uninquiring about his condition for so long seems like a stretch. Cronenberg becomes a little too distracted by his prosthetics in the later stages, particularly since they show their age in places. And, without Goldblum and Davis sharing as much screen time, the proceedings revert to the more distanced approach we expect from the director.

In the Cronenberg oeuvre, it’s an interesting juncture; he lands himself a big commercial success exploring his fascination with body horror at the very point he would begin moving away from it (at least in the overt manner seen in his career up to that point). At one point Brundle raves about the fears of the flesh, and it could be a line straight out of Videodrome. As far as the AIDS metaphor is concerned, you can see why it was suggested (Cronenberg rejected it, saying the film was actually a metaphor for aging) but it really doesn’t translate in any coherent way.

John Getz is suitably sleazy as Veronica’s ex-boyfriend, and the fate of several of his limbs is as gross as it was 25-plus years ago. The major contributor I hadn’t really recognised previously is Howard Shore; his score is outstanding, particularly when Goldblum delivers his “insect who dreamt he was a man” speech.