Is Mr. Reincarnation enjoying his cake? 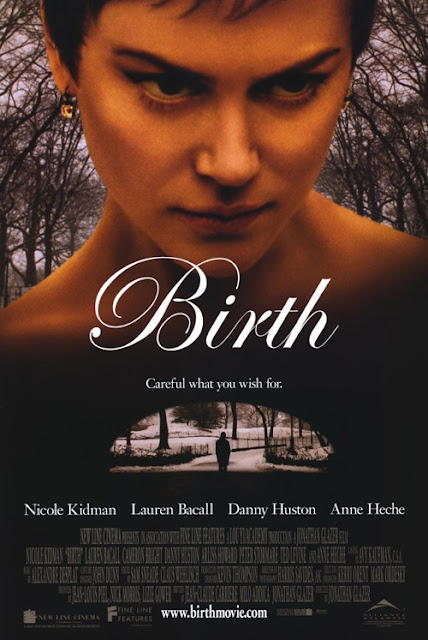 Jonathan Glazer’s sophomore film (following the superb Sexy Beast) is an unsettling piece that manages to be, by turns, profound in what it has to say about love and manipulative in the ambiguity it utilises to extend the narrative. As a result, it feels as if there’s a butting of heads between ideas and the resultant method of storytelling.

Nicole Kidman’s Anna decides to remarry 10 years after her husband Sean died. At which point a 10-year old boy, also called Sean, appears on the scene claiming to be her reincarnated husband . By this point the film has already offered two conflicting scenarios concerning the truth or otherwise of his identity; as Sean dies, we see the birth of a baby, instructing the audience to link the events on some level. In the subsequent scene, at Anna’s engagement party, the wife of (dead) Sean’s brother buries a tin, witnessed by young Sean. The contents of the tin later enable the reading that young Sean may have invented his connection to Anna.

The problem with this kind of elusiveness is (as evidenced by the imdb boards, for example) is that the viewer ends up fixating on the wrong aspect of the story. It isn’t whether Sean is or is not dead Sean returned, but whether Anna can ever let go of her deceased husband (the signals suggest not). I’ll admit that I came down against the metaphysical interpretation, reading both (young) Sean and Anna as attempting to make a connection for different reasons.

By the director’s own admission, the film is more about Anna, and to some extent Sean is a cypher, impenetrable and unforthcoming (ambiguous). Anna herself is clearly mentally unravelling, and Kidman really sells this. She is matched by a bewitchingly intense supporting turn from Anne Heche, whose revelations appear to put a punctuation mark against any further discussion of Sean’s identity. However, the tone of the film is so intentionally subjective that it refuses to commit fully to a final verdict.

A mention for Danny Huston, who I’m usually a fan of, but his character here is over-dramatic to the point of cartoonishness, and as a result he becomes an element that doesn’t work especially well (his behaviour is expedient to where the script wishes to take the other characters, rather than being believable in and of itself).

While Glazer has picked rich subject matter to explore, I don’t think he’s been wholly successful with it; if he had done, the thematic content would have won out over the narrative ambiguity. Additionally, the ideas put into motion (an adult woman’s feelings for a 10 year old boy, complete with a slightly notorious bath scene) are troublesome even given the reincarnation device; remove that, and reverse the genders, and you’re left with something highly unsavoury.  To be fair, these issues are voiced within the narrative but I was left with the feeling that to make it work either a few more drafts of the screenplay were needed or the director needed to venture more into the Nic Roeg territory of fractured reality.

Suitably Roeg-ish, Glazer’s next film has Scarlett Johansson as an alien in Scotland disguised as a human.