lf one does what God does enough times, one will become as God is. 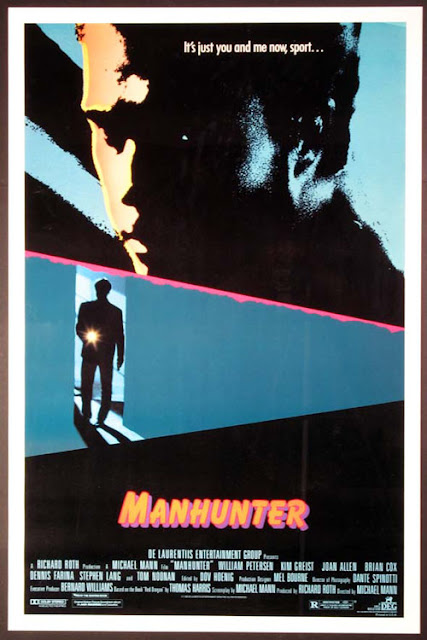 The last time I watched Manhunter was on video, and fortunately it was a film I was able to savour well before Anthony Hopkins devoured its most famous role.

Returning to it, I was surprised by how well this has aged, as frankly the duff soft rock music that occasionally becomes intrusive was duff even in the late '80s. Elsewhere, the atmospheric synths that accompany much of the film are still effective, in a proto-Heat ambient way.

Visually, it's a strange mixture of the heightened and the subdued; Dante Spinotti's cinematography follows the rich visual palatte already developed by Michael Mann with Miami Vice (he'd later work on the altogether more journeyman version, Red Dragon), and despite occasional excesses (I'm not sure about Dollarhyde's vast pad by the bay, to be honest) the clinical approach seems entirely more appropriate (look at Lector's cell for evidence) than the gothic overkill of The Silence of the Lambs.

Indeed, while there are elements of the novel that I miss, Mann rather curbs Thomas Harris' more excessive impulses (which would only grow as his books became bigger and bigger hits). The film is notable for how low key it is much of the time, with a dedication to science of deduction that probably seems passé now, but was utterly innovative then. While I don't think the climax is completely successful, it at least means we don't get the now (and they were in the '80s really; just watch a De Palma movie) obligatory double ending of the novel (just when you'd been faked out that everything was over).

Cast-wise, William Peterson is effectively subdued as Graham, although the dialogue he's given sometimes works against that measured quality (the need to punctuate his vocalised internal processes concerning the Tooth Fairy with lines like "That's what you did, didn't you, you son of a bitch!"). And, with the benefit of hindsight, Spooky Mulder starts here.

Tom Noonan's Dollarhyde is supremely unsettling, but in his early scenes with Joan Allen's blind co-worker oddly touching (the visit to the vet is outstanding). And then there's Stephen Lang, now better known for hard man roles in the likes of Avatar, as weasely Freddie Lounds. As for Brian Cox's Lector, he doesn't exude the cultured charm of Hopkins but he does convey a brutal calm that lingers longer; his telephone call, where he wraps a secretary around his finger, is masterful.