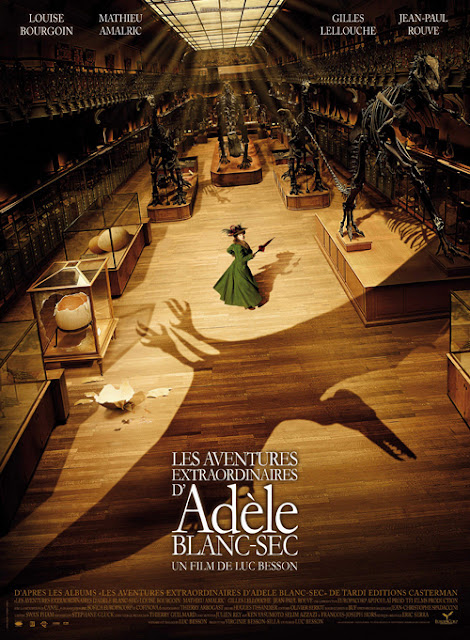 The Extraordinary Adventures of Adèle Blanc-Sec
(2010)

I'm not familiar with the source material for this, although Luc Besson - who now seems to be only mostly retired if it means making the occasional film with his kids in mind - has the visual acumen to make a live action Tintin should it ever fall from the paws of the motion capturers.

The problem here is that, whilst he creates an interesting and larger-than-life period milieu, Besson's material never rises above the amiably quirky and incidental. So it's fairly unmemorable, Adele's flashback to Egypt tomb raiding aside. And while the prosthetics-enhanced grotesques that populate the supporting roles create a consistency, other effects work, the CGI pterodactyl in particular (and later Egyptian mummies), is less impressive and shows up the budget constraints.

I wish I'd liked this more, but unfortunately the "Indiana Jones meets Amelie" quote from Empire on the DVD sleeve is merely wishful thinking.