Most of the cops hate our guts. 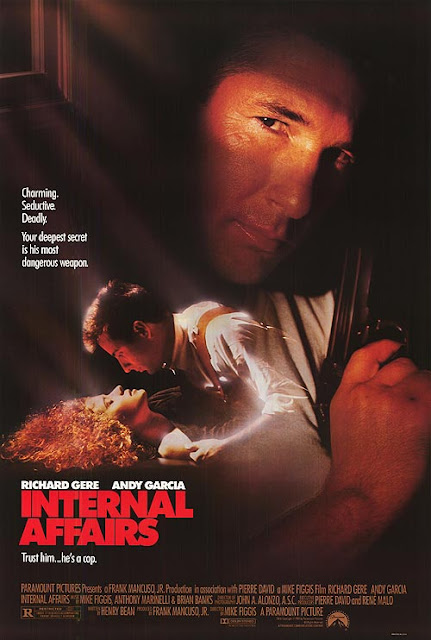 Mike Figgis’ tale of police corruption in LA hasn’t aged especially well. It has something of the glossy, ambient soundtracked quality of Michael Mann, and a commendable desire to make it’s protagonist not so far removed from Richard Gere’s dirty cop. However, lines such as “You’re just like him” make clear how unsubtle the lines being drawn between good cop and bad cop are.

But the whole is dramatically and stylistically so overblown that it frequently comes across as faintly silly. Andy Garcia’s cop is constantly on the edge of self-combusting (that Latino blood, don’t you know), but his aggression is only really believable when directed at his wife. Gere fares much better, partly because he’s always far more convincing as a bad guy (it’s the beady eyes, I think) and partly because the early stages of him losing control of his little empire are well essayed. It’s only later that he starts behaving in a frankly daft fashion.

None of this is helped by Figgis’ curious cinematic affectations, be it Garcia continually visualizing his wife with Gere and uses of slow motion in places that undercuts the tension. Too frequently it feels like it’s weighed down by the baggage (and hair) of a late ‘80s movie, rather than an early ‘90s one. The occasional dose of humour is welcome amidst all the ponderous glowering; Garcia, arguing with his wife, shouts that he is not having an affair with his partner (Laurie Metcalf, great) as she is a dyke. Who is on the other end of the phone his wife has just answered. Gere cajoles as an associate to shoot his wife. A shot goes off. “That’s my foot”, intones Gere.