Nothing I have done can be one half as bad as the thoughts in your head. 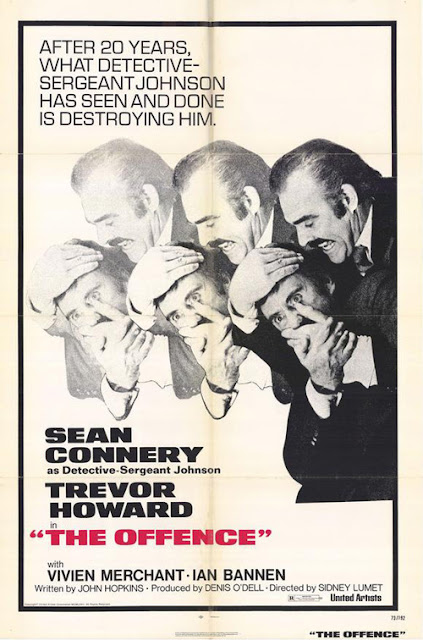 Sean Connery's best performance by far in one of Sidney Lumet's more stylistically accomplished films. Lumet tends not to be big on flashy camera work and fancy editing but perhaps having just done The Anderson Tapes with Connery and trying to distinguish this from its stage origins made him approach things differently.

Certainly, there are a numerous careful compositions with Connery's profile foregrounded, made all the more distinctive by the following wide shots. There’s also some extremely well-used slow-motion photography. Add to that Harry Birtwhistle's eerie score and the fractured, almost elliptical approach to the narrative and editing of some sequences and you've got a film that - while it's not the same at all thematically - bears some comparison to Taxi Driver in the way it tells its story through the hallucinatory breakdown of its central character.

I hadn't seen this in a good 15 years, and I'd forgotten just how riveting Connery is here, and raw. Trevor Howard does his best in his sequence questioning Connery but Connery is acting him off the screen. Ian Bannen, on the other hand, is mesmerising - the more so because he's so unsettling in his motivations, matching Connery moment for moment. It's a very skillful piece of film making, only let down slightly by some of the over-done dialogue where the theatrical origins sit uneasily with the adaptation to film (I'm thinking particularly of the sequence with Connery's wife).