Our media is no more truthful than yours, American. 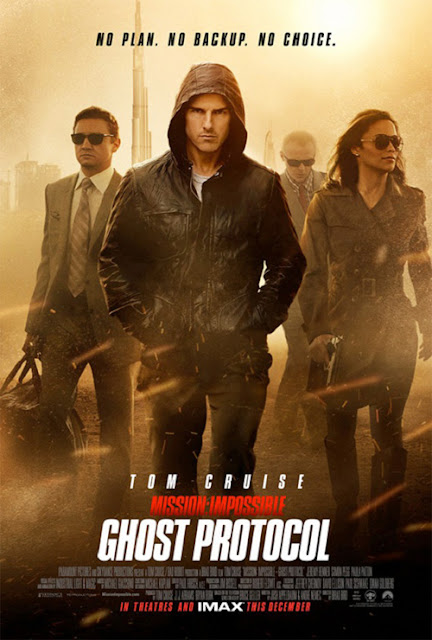 Brad Bird excels with the 100% pure adrenaline action and suspense sequences in this fourth entry in the series, which is fortunate as it's on the couple of occasions that the story eases down a notch that you notice just how sloppy the script is. Tom Cruise is solid in his return as Ethan Hunt, reining in his shit-eating grin, which is always a plus. For a 50 year old running and jumping like a sprightly gazelle and actually hanging off the tallest building in the world some kind of respect is due for gung ho dedication to his art; either that or ridicule should be heaped on him for acting like an antediluvian teenager.

The film lacks the really ripe villainy of MI3, but there's little doubt that the action is more finely crafted and that the missions themselves have more stacked-up against-the-odds implausibilities to get out off (and entertaining just-feasible gadget trickery) that seem more in keeping with the original series. But while MI3 actually succeeded in upping the emotional stakes (something the series never really called for) any attempts by this one to do so flounder (notably in the epilogue where the team's self-congratulation is squirm-inducing and a coda that is so unclear in terms of meaning that you have to think the makers were either clueless about it themselves or intent on messing with the audience for the sake of it).

Of the team, Simon Pegg trots out his comedy goofball shtick to occasionally amusing effect but we've seen him mugging like this a few too many times of late. Paula Patton is okay, but I much preferred Maggie Q (and Michelle Monaghan for that matter) in MI3. And Jeremy Renner is decent-enough but hardly has the makings of a Cruise replacement if they opt to go that route (his back story also looks like they wrote it on a napkln on the morning of shooting).

It's the action that stands out, though; I'd have to watch the thing again but right now it may rank as the best of the series; from the breathless opening with Lost's Josh Holloway to a superbly-staged prison break out, to Kremlin infiltration, to tower climbing and an extremely well edited double meeting to buy secrets, to a breakneck chase through a sandstorm.