That's a lot of hair. 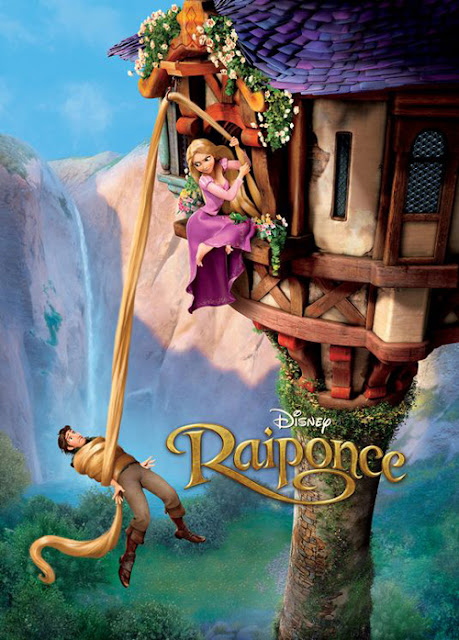 Six years in development, this Disney film eventually called in John Lasseter to work some of that Pixar magic. The result is a highly enjoyable riff on Rapunzel (the original title, changed to attract boys to see it) that occasionally seems to have been overly focus-tested (sassy, modern takes on the romantic leads, an anthropomorphicised horse and a chameleon as sidekicks).

The story is king (for Pixar; at least, that’s what they claimed prior to making Cars and Cars 2), and this one holds the attention throughout. Mother Gothel kidnaps Rapunzel as a child and locks her in a tower in order to make use of the rejuvenating properties of her magical golden hair. About to turn 18, Rapunzel takes the opportunity to escape and discover where the lights come from that are seen in the sky on her birthday each year. Of course, she is aided by a likeable rogue (Flynn Rider) and various obstacles present themselves along the way.

While some of the character design is rather generic (Rapunzel is a quite Barbie-ish), the voice casting focusses on who is suited to the role rather than signing big names (of whom, Mandy Moore is probably the best known). The climax is remarkably satisfying too, both dramatically and in terms of character arcs. While the film fortunately isn’t awash with musical interludes, there is a smattering of fairly forgettable Alan Menken tunes.