That's what you dream about? Being a monster? 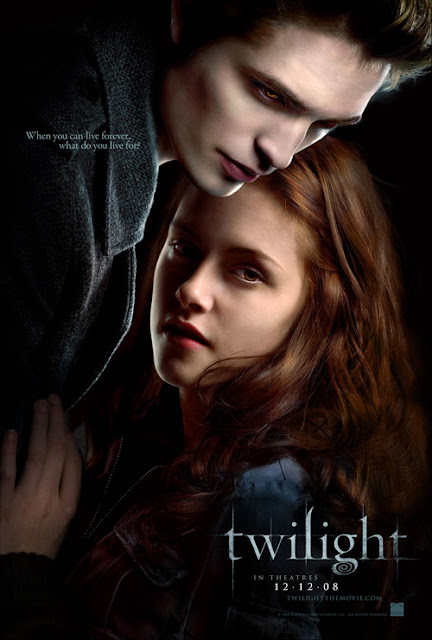 The obsession with this series may be mystifying to an outsider, but this first installment isn't actually terrible, even if it's the polar opposite of Joss Whedon's irony-first take on vampire lore. Actually, that may be in its favour since there's no accusations of plagiarism to level.

Catherine Hardwicke generally does a good job playing up the teen love frisson and awkwardness, whilst Kristen Stewart is delivers a performance that is far superior to the material she's working with and which as a result makes the film seem like it has more substance than it does. Robert Pattison is much less effective, all moody pouts and stares - but I'm sure that's what the teeny (and not so teeny) girls are invested in, so he probably does the required job. Put it this way, he makes David Boreanaz look deep and multi-layered.

Actually, scratch what I said about it not ripping-off Whedon; Ashley Greene's somewhat unhinged, prophecy girl vamp is clearly lifted wholesale from Drusilla. It's a shame Greene has so little screen time, because she, and the rest of the vamp extended family, are far more interesting than the rather pedestrian burgeoning love storyline (there's even one vamp doing an Edward Scissorhands impression, wandering around like he's soiled himself and hoping no one will notice). Peter Facinelli, who has spent a decade in bit parts, is also strong as the patriarch of the family.

Meanwhile, the werewolf anti-vamp factionalism of the Native American population of the small town is nicely portrayed; this aspect, and the sodden, rain swept forested landscape recall early series of The X-Files (made me quite nostalgic, even though that first series werewolf episode is desperately dull) and there's an effective capturing of the beauty of the rural Washington locale. Additionally, Carter Burwell's score adds immeasurably to the overall mood.

Less effective is the third act obsessive nasty vampire who makes even the most hackneyed examples from Buffy look original. Some of the effects sequences aren't so hot either (although Hardwicke makes some of the body language and underplaying very effective). Also, a word for the producers' desire to rejuvenate 24 villains, since Nina Myers turns up as Stewart's mum and Kim's second season pyscho babysitter dad plays Stewart's father.