The only thing more terrifying than blindness is being the only one who can see. 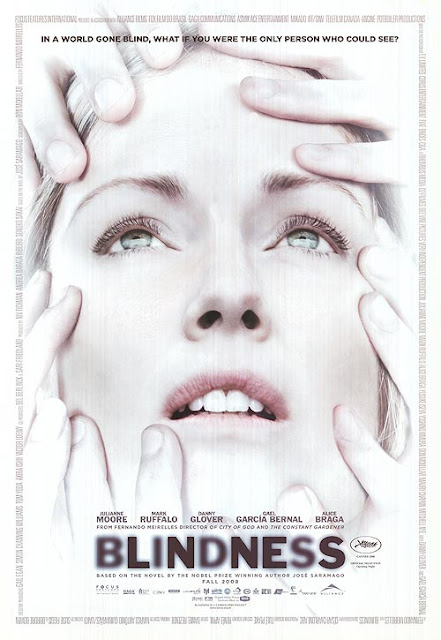 The premise has the potential for a five-star apocalyptic masterpiece, a smart piece in which mankind is brought down not by zombies but by its own selfishness. But the film gets caught up in the increasingly despairing, wallowing misery and faeces of an isolation unit where the first batch of those struck blind have been placed.

There's nothing particularly daring or revelatory about the resulting treatise on man's inhumanity to man, since we're talking concentration camp-like survival instincts coming to the fore. The eventual departure from this environment sees the film tip into the opposite extreme of emotion, wanting to have its cake of degradation but then reward you in salvation.

Which makes for an odd viewing experience that is anchored not by the script but by Mereilles' assured direction and the performances of Julianne Moore (never less than commanding in anything, even here where blighted by a character - as the only sighted person – who never seems to attempt a course of action to get the better of a situation in which she is the only one equipped to do so), Mark Ruffalo, Alice Braga (who reminds me a little of a young Lena Olin) and Danny Glover are all strong. In contrast, I dislike Gael Garcia Bernal more and more with every film I see him in. I'm not sure if it's because he chooses to play smug, over-the-top, lunatics, or because he is a smug, over-the-top, lunatic.