They just want a good show, that's all they want. 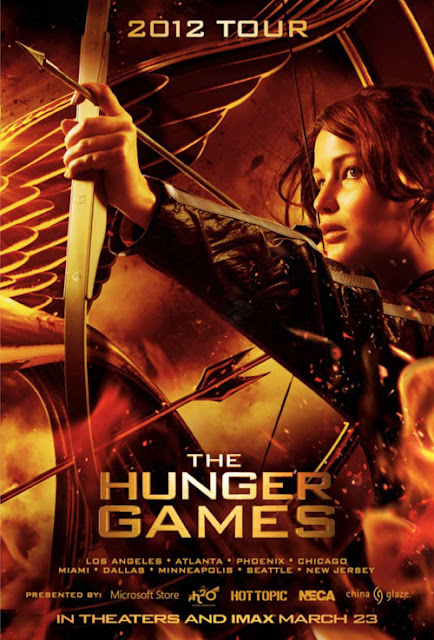 The parts of this that are most effective are, unsurprisingly, the 12 certificate Battle Royale episodes of teen-on-teen slaughter. Possibly even more disturbing than Royale, as you're conscious that this is a film made with kids as the target audience. In particular, the set piece on entering the field of games is strong stuff. There are also interesting (but elusive) machinations taking place in the privileged city (Stanley Tucci's presenter is winningly flamboyant). I expected to be critical of Gary Ross' use of shakycam (it's been a consistent complaint) but I didn't find it distracting.

The main areas where this comes up short are, damningly, the premise and the rule changes. I can buy a future where the populace are put in their place by having Arnie fighting for viewing pleasure, but one where children are sent to slaughter each other (rather than, say, the fittest, bravest young people from each section) is too much of a stretch. Wouldn't that be just asking for a revolt ("Look what they've done to out darlings!"). The only reasoning I could see is that this is "young adult" fiction so the games have to focus on such an age group.

As for the rule change, I couldn't believe that the outcome of the film wouldn't have been attempted by someone before in the games' 75 year history, or that the organisers would institute rule changes as way of manipulating the contestants (or if they would, that it wouldn't have been widely recognised for what it was by this point). Well-made, with a fine performance from Jennifer Lawrence, but replete with loftier aspirations than its source material can fulfil.