We're on an express elevator to hell: going down! 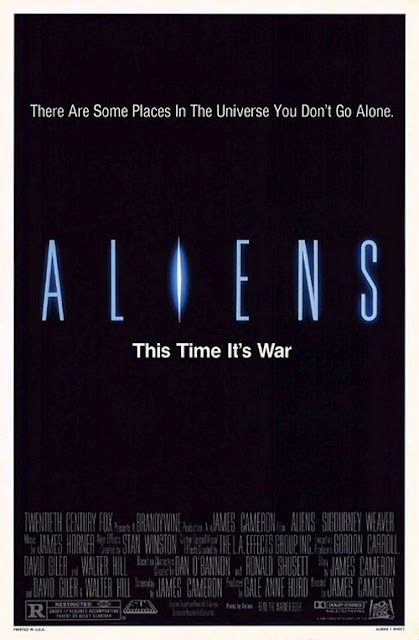 Maybe I've just seen this so many times that the action beats that made it seem so great originally have lost some of their power, but age hasn't preserved this film in the way it has Alien.

Whereas the former manages a fairly visionary future (as in, not weighed down by the period in which it was produced), Aliens has '80s movie all over it, from the outfits and haircuts to the macho militarism (always an aspect of Cameron's movies he's too much in love with to really buy into any apparent critique of the apparatus he may be making). And while the characters are clearly defined, this is only really of benefit to the supporting roles.

Ripley becomes a much broader character, with no room for Weaver to invest unsaid subtlety or nuance. Big signposts hang over her maternal instincts that drown out any shadings, so by the time of "Get away from her, you bitch" Cameron has zipped up the role model for every wannabe action movie heroine since.

Blu-ray does the film's effects no favours, showing Cameron reached beyond his grasp with a tighter budget than Scott had. It’s hard not to be distracted by some unforgiving front projection and blue screen work. Meanwhile, the aliens themselves are more like insectoid stormtroopers than the original's inconceivable nightmares. Still, Lance Henriksen is as magnificent as ever.