When things get tricky in my life, I talk to my fish. 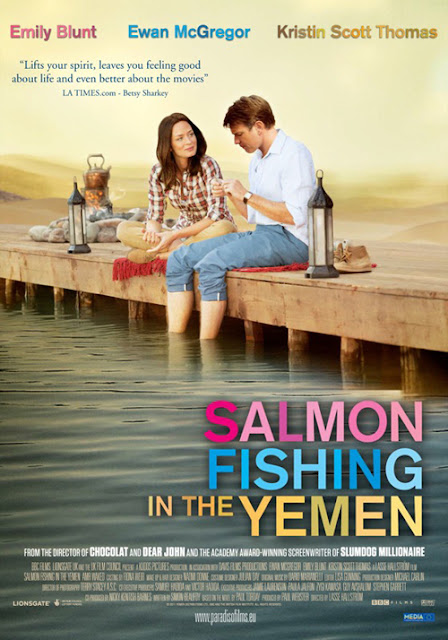 A witty first half makes the most of playing on the absurd premise of Paul Torday’s novel, and like pretty much everything from Lasse Hallstrom this is terribly, terribly good-natured.

Unfortunately the film becomes more and more schematic as it progresses, at its most bereft of inspiration with a sub-plot concerning an assassination attempt on Sheikh Muhammed.

The measures taken to keep Ewan McGregor and Emily Blunt apart until the end are also incredibly obvious. Fortunately, they have great chemistry. McGregor, in particular, is immensely likeable; perhaps it's because he's using his native accent, but he reminded me of the McGregor who showed so much promise in his early work with Danny Boyle.

Amr Waked makes an impression with a charismatic turn as the Sheikh, it's a shame some of the plotting surrounding him frequently fails. And if it all turns out very sugary, well this is the director Chocolat.

I was toying with the idea of translating Kafka into Welsh, but how do you translate his values?

May 25, 2021
Only Two Can Play (1962) (SPOILERS) There aren’t very many occasions when Peter Sellers immersed himself in “proper” characters, as opposed to caricatures or sketches. Probably because, in such instances, he had too little foliage with which to conceal himself. Mostly, these were straight roles ( Mr. Topaze , Hoffman , The Blockhouse ), but there’s also this, a curiosity of a kitchen-sink comedy from Launder and Gilliat. Only Two Can Play ’s far from the top of their game, an adaption of Kingsley Amis’ second (published) novel That Uncertain Feeling – his first, Lucky Jim , had earlier been made by the Boulting Brothers – but it’s an interesting performance from Sellers, filtered through a Welsh accent and a dry wit.
Post a Comment
Read more