Why did you grow your hair so long? 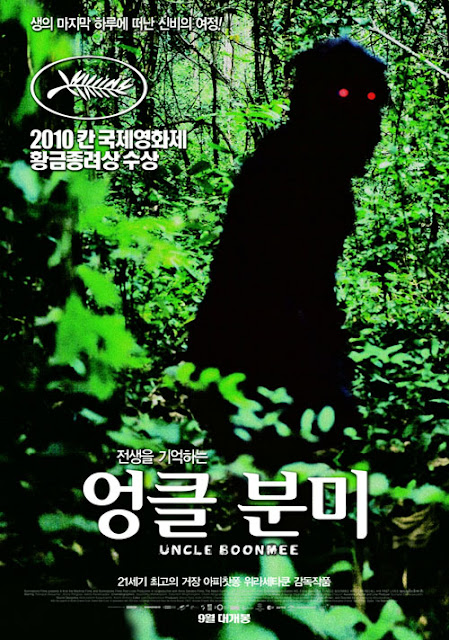 Uncle Boonmee Who Can Recall His Past Lives
(2010)

Thai Palme d’Or winner that might be accused of having a misleading title, as there is very little suggestion of past lives in the film; there’s a sequence concerning a princess who becomes a catfish, but the recall in question appears to amount more to a series of casual, narratively fragile remembrances of Boonmee’s current life (as he is surrounded by ghosts in his final hours).

The pace is slow, almost somnambulant, with the effect that at times events unfold hypnotically (particular since the characters interact in a calmed and placid manner). But there is also a rich seam of humour, not least during the dinner table scenes where figures from Boonmee’s past arrive (including the strikingly visualized “ghost monkey” that features on the film’s posters). Indeed, the languorous pace and deadpan vibe occasionally put me in mind of Jarmusch.

It’s been suggested that the remembrances of the past and meanderings into history and myth represent a commentary on Thailand itself but, while there are clearly subtexts strewn through it, the overall tone doesn’t lend a strong sense of political, or any other, commentary.