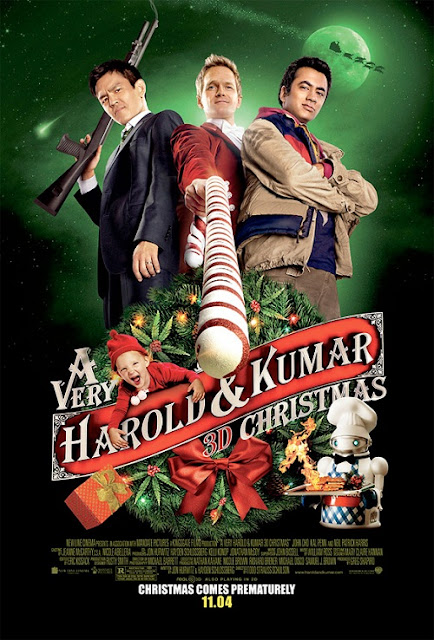 Frequently hilarious second sequel, and superior to Guantanamo Bay (which hit a “high” early on with the aeroplane/terrorist scene and a definite low with the unfunny stoned George W Bush impersonator).  Harold is working in the city (protestors hold placards reading “Wall Street Sucks” and “Wall Street 2 Sucks Harder”) while Kumar is an out of work stoner (he was briefly employed by the White House, one of a number of witty in-jokes). Although estranged from each other, the quest for a Christmas tree forces them back together. It’s awash with the usual bad taste humour (including a baby getting higher and higher on progressively stronger drugs), really stupid 3D, and of course the return of Neil Patrick Harris (Gracie: Get off me! I thought you were gay! NPH: I am gay. Gay for that…)

Most inspired of all are Wafflebot (of whom more in a moment) and the casting of Danny Trejo as Harold’s father-in-law (Koreans killed his mother).  Trejo is sublime as a Christmas obsessive who is repelled by faux-trees and wears a horrendous-yet-fantastically-unTrejo seasonal motif sweater. There’s even a montage sequence in which Trejo acts out Kumar’s comment “When he sees this beautiful tree he’s going to jizz all over it”. Also having fun in a hard man role is Elias Koteas as Russian gangster Sergei Katsov. The movie missteps on a few occasions; the Claymation sequence simply isn’t very good, and NPH in heaven is trying a little too hard to be inflammatory. However, the splendor of Wafflebot more than makes up for the odd shortcoming elsewhere. He’s utterly adorable. He loves waffles. And he fucking hates pancakes.