You're going to need to settle down, sir. You'll never survive if you lose control, Mr. Fox. 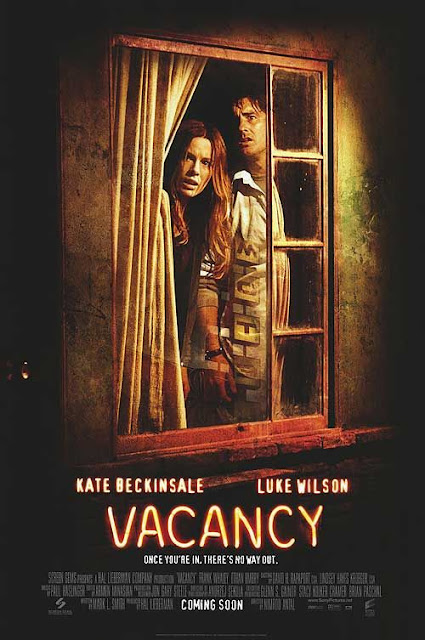 I quite enjoyed Nimrod Atal’s Predators (I was going to call it unnecessary, but it did serve the purpose of consigning the Alien vs Predator franchise resoundingly to the bin), and you can see how he nabbed the job in this efficient but unoriginal thriller. Luke Wilson and Kate Beckinsale, estranged due to the loss of their son, inadvisably leave the Interstate, have car trouble, and before long are resigned to spending the night at a run-down, seedy motel.

The proprietor of which is moustachioed Frank Whaley, who says “Fuck!” a lot when provoked to ire. Initially the loud banging on the walls is merely annoying. Which quickly turns to panic when Wilson happens upon a collection of what appear to be snuff videotapes, shot in the very honeymoon suite room they have rented.

And yes, there are cameras behind the walls. The discovery is more unnerving than anything that follows, the tension diluted as we gradually see more and more of the threat they face. In fact, the best element of the production is the title sequence and accompanying score, which lend a vibe that this will be more of a Hitchcockian game of wits than the sub-slasher movie it becomes.