My presence lay over the hospital like a pall - I found it all tremendously enjoyable. 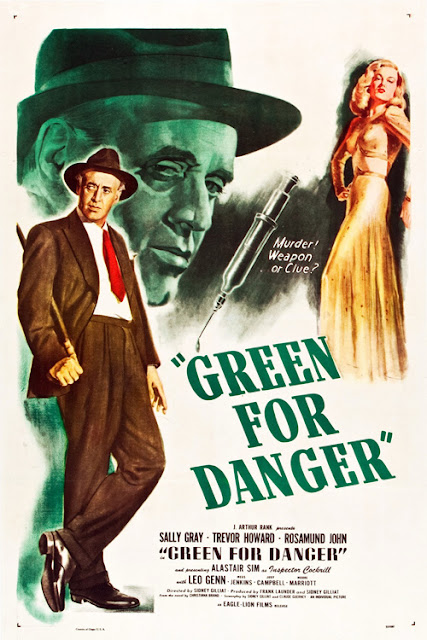 Generally identified as a Launder and Gilliat comedy, the only clowning here comes from leading man Alastair Sim; the murder plot is played “dead” straight. But Sim is such a delightfully eccentric, invasive presence that its misrepresentation is entirely understandable. And that’s in spite of his Inspector Cockrill not appearing until more than half an hour into the proceedings (only Sim’s voiceover announces his involvement).

The screenplay was adapted from Christianna Brand’s novel of the same name, one of seven to feature the Inspector. Set around a rural hospital in 1944, foul play is suggested by Sister Bates (Judy Campbell) after a postman (Will Hay regular Moore Marriott) dies on the operating table. When Sister Bates is killed, Inspector Cockrill is summoned and immediately focuses his suspicions on the doctors and nurses attending at the initial death. These include Dr, Barnes (Trevor Howard), Mr. Eden (Leo Glenn), Nurse Linley (Sally Gray), Nurse Woods (Megs Jenkins) and Nurse Sanson (Rosamund John).

Naturally, there is elaborate misdirection and numerous red herrings; the Inspector-free opening section ensures that the Agatha Christie-esque melodrama of the suspects’ obsessions and indiscretions are involving in and of themselves, helped by a strong cast. Howard’s Barnes is jealous with a shady past, Glenn gets to play up the oily ladies’ man, while Jenkins’ broad affability instantly invites closer scrutiny. But this is Sim’s show, and his gleefully inappropriate attitude to his investigation is frequently hilarious. His irreverence is on display as soon as he arrives at the hospital. Asked what’s wrong, he responds, “Just the usual slight discomfort after meals”.

Whether he’s swiveling on a chair with childish delight, appearing out of the darkness to complete Eden’s quotation from Troilus and Cressida (as he woos Nurse Linley) and then pushing back a shrub to reveal the spying Barnes, or pulling up a chair for a grandstand seat as Eden and Barnes roll around the floor scrapping, Sim’s behaviour is endearingly unpredictable. Asked who would want to murder the postman, he replies “My dear young lady, how on Earth should I know? I’ve only just got here”. When Dr. Barnes expresses concern over the attention of the Press, Cockrill responds, “I don’t mind; they always give me a good write-up”.

So it comes as something of a surprise that Cockrill’s confidence leads to a conclusion exposing his fallibility (“In view of my failure - correction, comparative failure - I feel that I have no alternative but to offer you, sir, my resignation, in the sincere hope that you will not accept it."), albeit one that doesn’t seem to put him on the back foot for too long, as the quote suggests. As much fun as the film is, the Inspector’s plan to expose the criminal is an enormous stretch for a number of reasons – not least the danger he puts one individual in. But I’ll wager you won’t guess the murderer (I couldn’t remember, and I’ve seen the picture several times before).

Believe me, Mr Bond, I could shoot you from Stuttgart und still create ze proper effect.

November 13, 2015
Tomorrow Never Dies (1997)
(SPOILERS) Some of the reactions to Spectre would have you believe it undoes all the “good” work cementing Daniel Craig’s incarnation of Bond in Skyfall. If you didn’t see that picture as the second coming of the franchise (I didn’t) your response to the latest may not be so harsh, despite its less successful choices (Blofeld among them). And it isn’t as if one step, forward two steps back are anything new in perceptions of the series (or indeed hugely divisive views on what even constitutes a decent Bond movie). After the raves greeting Goldeneye, Pierce Brosnan suffered a decidedly tepid response to his second outing, Tomorrow Never Dies, albeit it was less eviscerated than Craig’s sophomore Quantum of Solace. Tomorrow’s reputation disguises many strong points, although it has to be admitted that a Moore-era style finale and a floundering attempt to package in a halcyon villain aren’t among them.

February 21, 2020
Underwater (2020)
(SPOILERS) There’s no shame in a quality B-movie, or in an Alien rip-off done well. But it’s nevertheless going to need that something extra to make it truly memorable in its own right. Underwater, despite being scuppered at the box office, is an entirely respectable entry in both those arenas from director William Eubank, but like the recent Life (which, in fairness, had an ending that very nearly elevated it to the truly memorable), it can’t quite go that extra mile, or summon that much needed sliver of inspiration to set it apart.

May 24, 2013
Django Unchained (2012)
(MINOR SPOILERS) Since the painful misstep of Grindhouse/Death Proof, Quentin Tarantino has regained the higher ground like never before. Pulp Fiction, his previous commercial and critical peak, has been at very least equalled by the back-to-back hits of Inglourious Basterds and Django Unchained. Having been underwhelmed by his post Pulp Fiction efforts (albeit, I admired his technical advances as a director in Kill Bill), I was pleasantly surprised by Inglourious Basterds. It was no work of genius (so not Pulp Fiction) by any means, but there was a gleeful irreverence in its treatment of history and even to the nominal heroic status of its titular protagonists. Tonally, it was a good fit for the director’s “cool” aesthetic. As a purveyor of postmodern pastiche, where the surface level is the subtext, in some ways he was operating at his zenith. Django Unchained is a retreat from that position, the director caught in the tug between his all-important aesthetic pr…
1 comment
Read more

I still think it’s a terrible play, but it makes a wonderful rehearsal.

February 21, 2020
Room Service (1938)
(SPOILERS) The Marx Brothers step away from MGM for a solitary RKO outing, and a scarcely disguised adaption of a play to boot. Room Service lacks the requisite sense of anarchy and inventiveness of their better (earlier) pictures – even Groucho’s name, Gordon Miller, is disappointingly everyday – but it’s nevertheless an inoffensive time passer.

February 22, 2020
At the Circus (1939)
(SPOILERS) This is where the brothers sink into their stretch of middling MGM movies, now absent the presence of their major supporter Irving Thalberg; it’s probably for the best this wasn’t called A Day at the Circus, as it would instantly have drawn unflattering comparisons with the earlier MGM pair that gave them their biggest hits. Nevertheless, there’s enough decent material to keep At the Circus fairly sprightly (rather than “fairly ponderous”, as Pauline Kael put it).