Somewhere, some lucky guy's having a heart attack. 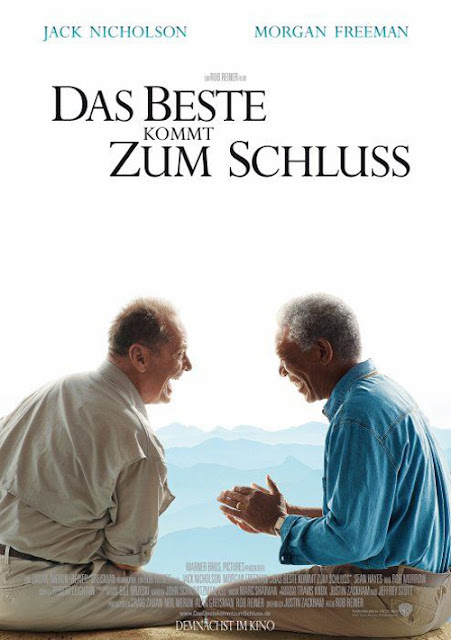 The Bucket List
(2007)
To be fair, this isn’t such a bad premise for a movie. But that’s all it remains, a premise. You can’t just pencil in two powerhouse actors (Jack Nichlson and Morgan Freeman) and expect the rest to work, but that’s exactly what the increasingly out-of-touch Rob Reiner does in his look-on-the-bright-side-of-death dramedy.

I’m very doubtful that a Hollywood movie could approach the subject of mortality without resorting to sentiment and cliché, and on that score The Bucket List doesn’t disappoint. But even that score, the emotional content is undercooked, going through the motions. Justin Zackman’s script barely amounts to a first draft; lets have two guys share a hospital room and decide to do some always-dreamt-of stuff before they expire. And throw in a bit of family angst along the way. And then die (I don’t think I’m giving away too much by revealing that). But that’s pretty much it.

Who would have though skydiving would be on the list? And then there’s driving a fast car and, er… getting a tattoo. That’s the extent of the writer’s inventiveness (banal, eh?), since the rest of the list appears to be made up of travelling to a few exotic locations while Freeman acts as an impromptu tour guide. And as for any attempts at philosophical discussion, the film plays it as safe and anodyne as possible. At least if, say, Bruce Joel Rubin had approached the subject he might have tried to stretch his audience a bit.

The moments of drama are laboured and unconvincing; the whole thing is so by-the-numbers predictable, and flabby and unfocussed, that everything rides on its stars. And, for a change, they are unable to perk up the material. Freeman actually appears to be tired of playing Morgan Freeman at long last, while Nicholson is unable to pep things up with his usual gleeful anarchy (indeed, I hope he finds a more suitable project to finish up his career on than this and How Do You Know). Rob Reiner’s ‘80s sure touch has long since deserted him, while Zackham is hoping for big success with his upcoming The Big Wedding (as writer/director). On this evidence I expect it will be eminently missable.