The truth is, no one knows about me. I feel like I’m just sending things into this giant void. 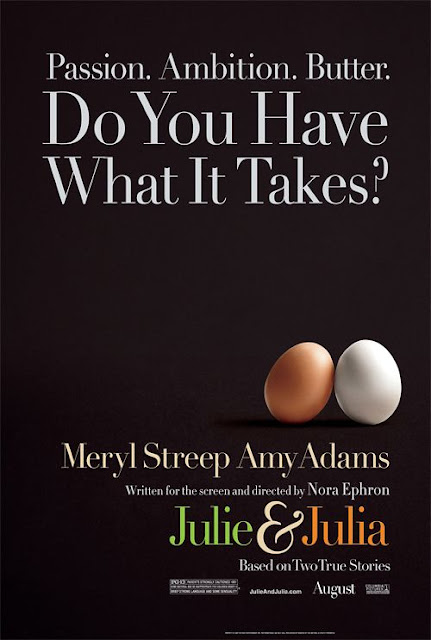 Writer-director Nora Ephron’s final film, and third collaboration with Meryl Streep (she wrote the scripts for Silkwood and Heartburn), Julie and Julia is so insubstantial dramatically it would barely register if not for the quartet of performances that fill-out its time-shift narrative.

Julie Powell (Amy Adams) is a would-be novelist working in a call centre. She happens on the idea (suggested by her long-suffering husband Eric, Chris Messina) of blogging an attempt to cook her way through former TV chef Julia Child’s (Meryl Streep) book of French cuisine recipes; in only a year. And, lo, her blog is a huge hit. Giving hope to millions of bloggers across the globe that somehow, some way, fame and recognition awaits them too. Obviously, this doesn’t have enough dramatic heft to warrant an entire film, so we intercut with the story of Child writing the cookbook while based in France with her diplomat husband Paul (Stanley Tucci).

The problem is, while the film is utterly inoffensive, none if it is hugely involving. And, at over two hours in length, that’s a long time to be relying on audience goodwill. Julie, despite the efforts of the adorable Adams, is so bereft of characterisation that she is reduced to high-fiving her co-worker when she discovers people are reading her blog, And indulge in further high-fives for other, assorted reasons. She has an argument with Eric. She drops a dish on the floor. She doesn’t get to meet Julia Child.

Most problematic are the blog posts themselves, which may have been a winning read for the original devotees but read aloud they are, more frequently than not, irritating. Seriously, Adams can only do so much; the rest is beyond her to repair. And Messina lends sterling support (it shows there’s a fundamental problem with a script when characters are required to sit watching television and react to it for several minutes, and this happens at least twice during the film); I recently saw him in Ruby Sparks and he delivered just as charismatic a supporting turn there.

So it’s left to Julia to keep you watching. And this story strand sort-of works. But for all the wrong reasons. It has little more substance than the Julie sections, but the performances of Streep and Tucci are so likeably out-there that you’re won over. Streep, in particular, delivers more of an impersonation than a rounded characterisation. But Childs was clearly so dottily eccentric that there probably wasn’t much way round it (I had never heard of her prior to this).

I’m not saying it’s not a good performance, but it’s as batty and OTT as the Dan Aykroyd SNL version of her we're compelled to sit through at one point. There isn’t much in the way of a living breathing person to get to grips with. Tucci is great too, inhaling her every utterance as if it’s his life force. There’s an incredible chemistry between the two of them, which very nearly compensates for their quasi-sitcom personalities. We're treated to an occasional scene, such as Paul being investigated for potentially un-American activities, which threatens to become engrossing. But this soon passes.

Julie and Julia is harmless mélange of two plots that don’t intersect, so to make that work even vaguely is something of an achievement. It’s certainly better than Ephron’s other writing and/or directing projects in the ‘00s, but unfortunately a significant way short of the ‘80s scripts that made her name. Nevertheless, worth a look for Streep, Adams, Tucci and Messina.