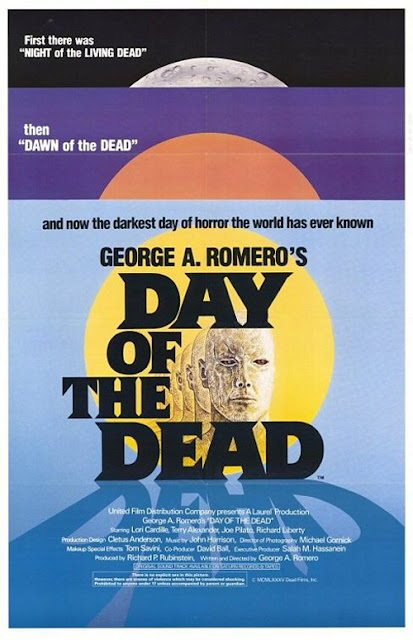 George Romero’s third “Dead” movie eschews the social satire of Dawn, replacing it with less nuanced tensions between a team of military and scientists. They uneasily co-exist in an underground bunker in Florida, their purpose to find a solution to the zombie plague.

The director remains partial to the slow burn narrative, though, and we’re more than two-thirds of the way in before zombie carnage erupts. Prior to that, the claustrophobia of the setting and fractured relationships between the small group make for strong dramatic material.

This is by no means the most impressive assembly of thespians, but they do the job for the most part. Romero has fun playing about with the zombie formula in the form of Bud, the zombie who displays awareness beyond bloodlust.  Elsewhere he attempts to convey believable reactions within the team, varying from loss of nerve (Miguel) to dismissal of the heroics and the purpose of the project (John) to incipient madness (Dr Logan). While the soldiers, now led by Rhodes (“Choke on ‘em!”), are a uniformly objectionable bunch, it’s not as if the scientists are any better. Our heroine, Sarah, is clinging on hopelessly to the idea of finding a cure but it's the crazed Logan who is getting results (even if their value is debatable).

When the breakout occurs, Romero has a tendency to linger on the money shots at the expense of tension (but that’s what the target audience wants, presumably) and probably doesn’t take as much care as he could have done in scripting and editing the escalation (with Miguel in particular there is a sense that however nuts he’s gone, his drastic action only happens because the film needs it at that point). A great synth score from John Harrison too (although the electric guitar is overdone towards the climax).