I'll change; I'll change. I've learned that I have the strength to change. 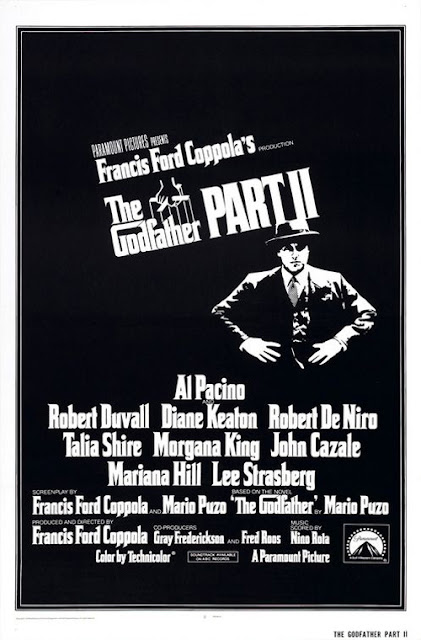 The film always cited as the one sequel that improves on the original. I'm not so sure it does. Coppola's undoubtedly honed his directing and storytelling skills even further, but there's a sense that this is only repeating what we already know.

Yes, we are left in no doubt of what Michael is capable of and leaving him a man emptied of humanity is strong enough reason to make this worthwhile; the Fredo angle of the plot is meticulously devised. The intercutting of the old Godfather's rise with the troubles of the never fails to impress, pulling you so completely into each strand that you aren't eager to return to, or conscious of, the the other one until Coppola chooses to revisit it.

Diane Keaton and Lee Strasburg (as Hyman Roth) stand out amongst the supporting players and while it's sad that Duvall elected not to return for Part III you can see his character increasingly sidelined by the paranoid Michael. Pacino makes the most of his bursts of temper, punctuating his otherwise steely behaviour. But it reminds you that following his Revolution hiatus from acting, as frequently good as his performances were, he too frequently fell back on BIG performances rather than trusting in the power of stillness.