I'm a homicidal maniac, they look just like everyone else. 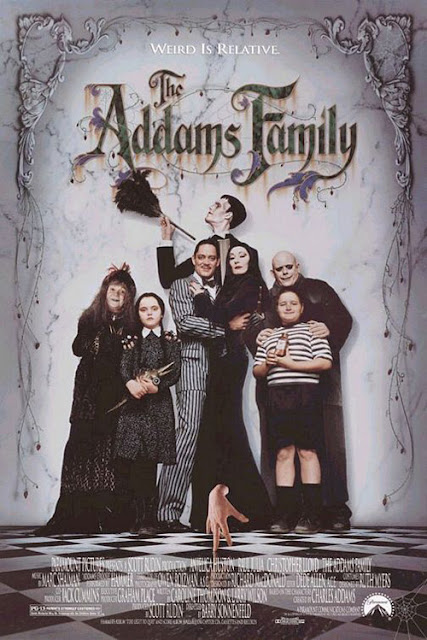 Arguably this can’t just be consigned to the ever-expanding “TV series adaptations” category that studios never seem to learn from (how many have been sufficient success stories to justify the effort?) But it’s a safe bet that more people are familiar with the ‘60s TV series based on Charles Addams characters than the cartoons themselves. And there’s never any doubt that The Addams Family has been artificially extended to feature length, unable to find an identity beyond its one-joke premise.

Because, how can you graft character arcs onto a format that is essentially one character saying, “I am so bad” and another replying “How marvellous”? There’s only so much scope in riffing on this type of comedy of reversal, and unless you come to the material with a suitably anarchic energy it will quickly become repetitive and tiresome. The script from Caroline Thompson (Edward Scissorhands) and Larry Wilson (Beetlejuice) attempts to foist a structure on the Addamses by introducing us to them at a point where Uncle Fester has been 25 years in absentia. And then it introduces a rather strained plot to take possession of their home and its contents by having a lookalike Fester (or is he?) infiltrate the clan.

The structure is halting and never builds up any momentum. Barry Sonnenfeld was embarking on his first film as director, having worked as both the Coen Brothers’ and Rob Reiner’s cinematographer. The result looks predictably sumptuous, and the production and costume design are first class. But it’s all surface gloss, a sub-Tim Burton fantasy confection; perhaps that’s why Burton ultimately elected not to make the picture (not that Burton has great hidden depths, but it would quite possibly looked as if he was mimicking himself). The craziness of the characters is so studied and deliberate that it appears staid and predictable. It’s a very conservative, palatable black humour on display here; any notions of cartoon’s satire are blunted by how obvious and laboured the whole affair is.

While Raul Julia and Anjelica Huston are appealing as Gomez and Morticia (although Julia cannot hope to equal John Astin’s genuinely eccentric performance in the TV show), Christopher Lloyd is miscast as Fester. He gives a lumbering, heavy-going rendition that grates on the nerves. I’m not sure the proposed Anthony Hopkins would have been any better suitable. Someone infectiously excitable would have been more appropriate. Christina Ricci essays Wednesday with appropriate gothic impenetrability, but no one else leaves much impression.

As with Warner Bros’ Batman, Paramount (which took over the production from the failing Orion) sought commercial tie-ins. The resulting sporadic blasts of MC Hammer during the course of the film seem only more misjudged. But, since it was a hit (the seventh most popular that year), it opened the door to a (superior, it must be admitted) sequel and the aforementioned slew of crappy adaptations of TV shows. It has a lot to answer for.