Sawbones! For that ye’ll die! I’m coming for ye!


Doctor Who
The Smugglers: Episode Four 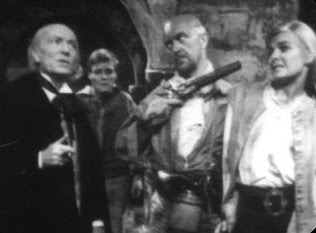 This episode probably suffers the most from being audio/reconstruction-only, as it’s much more action-orientated. It’s also more orientated towards the supporting cast than the crew; Ben and Polly mess about in and out of tunnels while the Doctor stands firm as he faces up to Cherub then Pike. 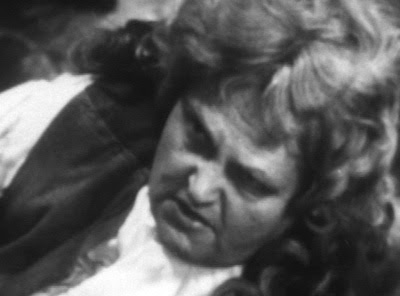 The Squire is curiously rehabilitated. He claims he “was a fool and ill-led” after being shot by Cherub, and comments later that the Doctor has showed him the error of his ways. The Doctor insists on remaining to help the injured Squire rather than heading off to the TARDIS. Is forgiveness in the eyes of the Doctor absolution enough? There’s no suggestion that Blake intends to seek justice against him (“Thank you, Squire. The Day is ours”). Yet it was a direct consequence of his actions that Ben and Polly languished in jail awaiting execution for Holy Joe’s murder. The story seems to consider it enough that he “never spent blood” in his villainy; indeed there’s a bit of a discussion over degrees of roguishness between Pike and the Squire. 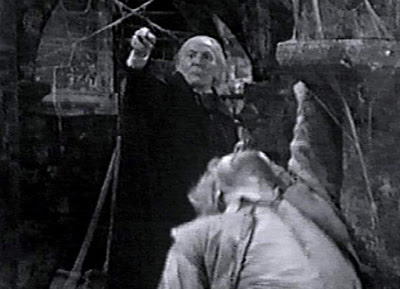 Blake takes a good while mustering the militia before arriving with them on the beach in time to aid Polly and Ben (one of the pirates felled is the Spaniard, played by Derek Ware). Ben’s again identified as a bit of a bruiser, this time keen to get back to the action in the crypt with Blake. He also gets to deliver the groaner “Polly, put the kettle on” which elicits a sound from Polly that should probably have been expressed as “Fuck right off”. 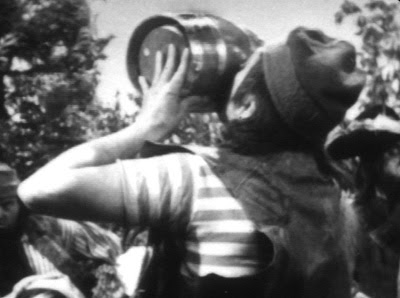 The pirates spend a fair amount of time knocking back the grog in the churchyard rather than obeying their Captain. Whose confrontation with the now out-for-himself Cherub is probably one of the highlights of the episode. If we could see it. I thought Julia Smith’s direction in The Underwater Menace Episode Three was pretty decent, at any rate. 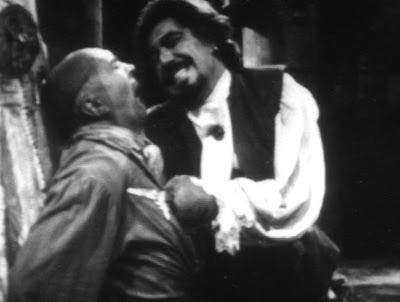 Pike: I never did trust that tongue of yours, Cherub. It was a mite too like the archangels’.

As before, the Doctor is resolutely non-plussed with Pike. He looks to change the terms of their bargain, requesting that he leaves the village be in return for Avery’s gold. And by the time he’s deduced the location of the booty, resulting in Pike scrabbling around in a hole (he finds some pearls, at any rate), Blake has turned up. And shoots him before Pike can carry out his threat.

Pike: Sawbones! For that ye’ll die! I’m coming for ye! 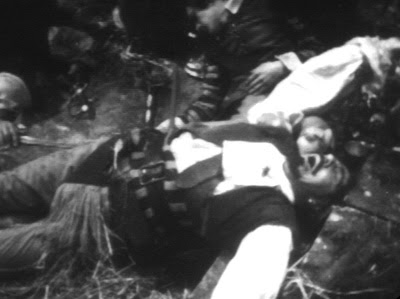 About Timesuggests that the Doctor may succumb to the curse of Avery’s gold in the following story. He does comment that he is “exhausted, but otherwise all right” when he is back at the TARDIS. I like his expansive comment to Polly in this regard. 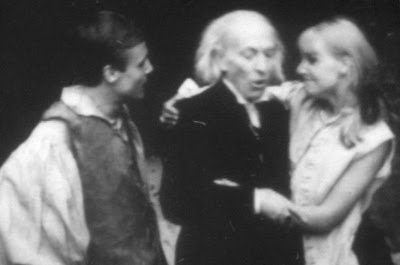 The Doctor: Yes, superstition is a strange thing, my dear. But sometimes it tells the truth. 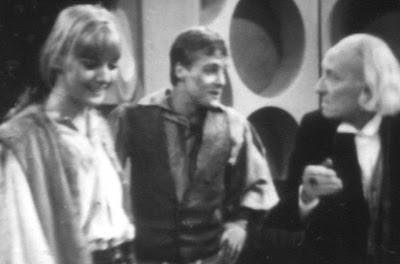 And again, we have it impressed on the new companions that the Doctor has no control of the TARDIS. Ben thinks that wherever they end up it can’t be as bad as there. The Doctor replies that it could be a great deal worse. And obviously something’s on the blink, as the inside of the TARDIS is susceptible to the cold of the South Pole.  I’d assumed that next story lead-ins were mostly a thing of the past by this point, but only three in the season don’t end on some form of cliffhanger (The Highlanders, The Macra Terror and The Evil of the Daleks). 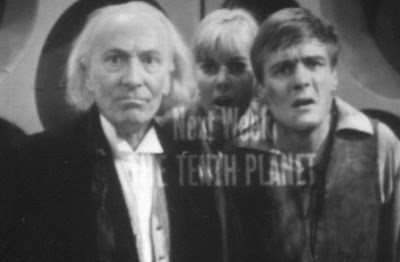 Is this the best penultimate story for a Doctor?  They’re a bit of a rum (ARRRRRR!) bunch, but I reckon so. It’s a bonus that there’s no intimation (other than his closing scene, perhaps) that the Doctor is on his last legs and, unlike the next story (where Hartnell was apparently employed as a guest artist), he’s not being sidelined by a pensive production team. I’m sure the story would have played even broader had it been a Troughton tale, but it ranks as a neglected gem for me.

January 12, 2019
Total Recall (1990)
(SPOILERS) Paul Verhoeven offered his post-mortem on the failures of the remakes of Total Recall (2012) and Robocop (2013) when he suggested “They take these absurd stories and make them too serious”. There may be something in this, but I suspect the kernel of their issues is simply filmmakers without either the smarts or vision, or both, to make something distinctive from the material. No one would have suggested the problem with David Cronenberg’s prospective Total Recall was over-seriousness, yet his version would have been far from a quip-heavy Raiders of the Lost Ark Go to Mars (as he attributes screenwriter Ron Shusset’s take on the material). Indeed, I’d go as far as saying not only the star, but also the director of Total Recall (1990) were miscast, making it something of a miracle it works to the extent it does.

I am you, and you are me, and we are here. I am the dreamer. You are the dream.

February 20, 2016
Communion (1989)
(SPOILERS) Whitley Strieber’s Communion: A True Story was published in 1987, at which point the author (who would also pen Communion’s screenplay) had seen two of his novels adapted for the cinema (Wolfen and The Hunger), so he could hardly claim ignorance of the way Hollywood – or filmmaking generally – worked. So why then, did he entrust the translation of a highly personal work, an admission of/ confrontation with hidden demons/ experiences, to the auteur who unleashed Howling II and The Marsupials: Howling III upon an undeserving world? The answer seems to be that Strieber already knew director Philippe Mora, and the latter was genuinely interested in the authors’ uncanny encounters. Which is well and good and honourable, but the film entirely fails to deliver the stuff of cinematic legend. Except maybe in a negative sense.

I’m not the Jedi I should be.

This is, after all, the reason we have the prequels in the first place; the genesis of Darth Vader, and the confrontation between Anakin and Obi Wan. That it ends up as a no more than middling movie is mostly due to Lucas’ gluttonous appetite for CGI (continuing reference to its corruptive influence is, alas, unavoidable here). But Episode III is also Exhibit A in a fundamental failure of casting and character work; this was the last chance to give Anakin Skywalker substance, to reveal his potential …
Post a comment
Read more

I take Quaaludes 10-15 times a day for my "back pain", Adderall to stay focused, Xanax to take the edge off, part to mellow me out, cocaine to wake me back up again, and morphine... Well, because it's awesome.

January 25, 2014
The Wolf of Wall Street (2013)
Along with Pain & Gain and The Great Gatsby, The Wolf of Wall Street might be viewed as the completion of a loose 2013 trilogy on the subject of success and excess; the American Dream gone awry. It’s the superior picture to its fellows, by turns enthralling, absurd, outrageous and hilarious. This is the fieriest, most deliriously vibrant picture from the director since the millennium turned. Nevertheless, stood in the company of Goodfellas, the Martin Scorsese film from which The Wolf of Wall Street consciously takes many of its cues, it is found wanting.

I was vaguely familiar with the title, not because I knew much about Jordan Belfort but because the script had been in development for such a long time (Ridley Scott was attached at one time). So part of the pleasure of the film is discovering how widely the story diverges from the Wall Street template. “The Wolf of Wall Street” suggests one who towers over the city like a behemoth, rather than a guy …
Post a comment
Read more

August 18, 2017
Atomic Blonde (2017)
(SPOILERS) Well, I can certainly see why Focus Features opted to change the title from The Coldest City (the name of the graphic novel from which this is adapted). The Coldest City evokes a noirish, dour, subdued tone, a movie of slow-burn intrigue in the vein of John Le Carré. Atomic Blonde, to paraphrase its introductory text, is not that movie. As such, there’s something of a mismatch here, of the kind of Cold War tale it has its roots in and the furious, pop-soaked action spectacle director David Leitch is intent on turning it into. In the main, his choices succeed, but the result isn’t quite the clean getaway of his earlier (co-directed) John Wick.