This is the story of a ship... 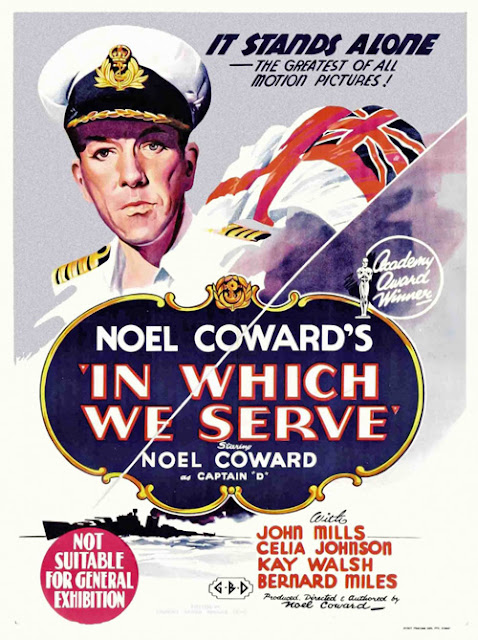 Noel Coward's WWII naval propaganda film is frightfully stiff upper lip, almost to the point of unintentional self-parody in places. Coward’s captain is so very, very, awfully proud of his men. Apparently there were concerns that showing the sinking of a British vessel would damage morale (Coward persuaded the supportive Ministry of Information that it would not), but you’d be hard pressed to find a more blatant example of the indomitable British spirit.

As a first time director Coward shows little flair; his blocking is basic and compositions unimaginative. Apparently he found the task of calling the shots terribly tedious and, after six weeks shooting, elected to show up on set only for scenes in which he featured (the action sequences were handled by David Lean, who had acted chiefly as an editor up to that point).

While the film certainly feels all of its two-hour length (Lean’s original script draft came in at more than four hours, so it’s a blessing he pruned it as much as he did), it does become engaging sporadically. Coward plays Captain Kinross (based on Lord Mountbatten and the sinking of the HMS Kelly), forced to abandon his ship after German bombers critically damage it (ultimately she sinks). He survives and finds himself adrift in a life raft with a number of other survivors (and at the mercy of strafing runs from those dashed Huns). A flashback structure is then adopted; we follow the ship, its captain and various crewmembers prior to, and through the early stages of the war (the film is set in 1941).

Coward just about pulls off playing the captain, but it's an incongruous role for him - having to rein in his natural effeteness and acting the doting husband and father. His flashbacks aren't especially riveting (Brief Encounter's Celia Johnson is memorable as his wife, however). John Mills and Bernard Miles fare better, the domestic comedy involving the latter in particular (Joyce Carey is most amusing as Miles' wife). Miles is also presented with one of the most affecting moments in the film, when Mills brings him some bad news (the preceding scene, during the Blitz, is effectively shocking, moving from light-hearted banter to sudden tragedy). Sir Dickie Attenborough is also given a strong role, in his first film, as a seaman who deserts his post and is racked with remorse over what he has done.

Coward nixed the casting of James Mason as he was a damn conscy . He also replaced William Hartnell after the man who would become the first Doctor Who turned up late on the first day of shooting; Coward dressed him down in front of the entire cast and crew and then made him apologise to them. And then sacked him.

The film’s Best Picture Oscar nomination suggests a piece rather more illustrious that it proves to be; perhaps as a consequence of being made during WWII, In Which We Serve hasn’t aged nearly as well as the similarly themed The Cruel Sea (produced a decade later).